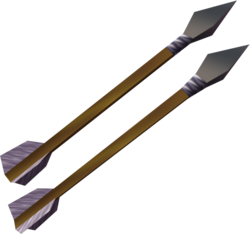 Arrows from Ocarina of Time

Throughout the series, there are multiple different types of Arrows, including Fire, Ice, Light and Silver Arrows.

The Fire Arrow is an obtainable item in the first three 3D Zelda games, including Ocarina of Time, Majora's Mask, and The Wind Waker. They also make an appearance in Twilight Princess, however, not as an obtainable item, but rather as a use of attack against Link by Bulblin Archers.

Bomb Arrows are a combinations of the Bow and Bombs together. They first appeared in Link's Awakening by simply using both items one after another. In Twilight Princess, Link can connect the two weapons at the same time, deliberately shooting Bomb Arrows. They are often used to cause objects to fall down to the floor. In Breath of the Wild, Bomb Arrows are obtainable items from treasure chests, defeated enemies, or items that can be purchased from a store.

Shock Arrows appear in Breath of the Wild and when used, will electrify its target, temporarily paralyzing it, and allowing Link to deliver some melee attacks.

Appearing in Breath of the Wild, Ancient Arrows are rare and expensive arrows that can obliterate most enemies with a single hit, including Lynels and direct shots to the eye of Guardians. However defeating a Lynel with an Ancient Arrow will prevent Link from being able to acquire any of the spoils.