Ankel Island is a location in Breath of the Wild. 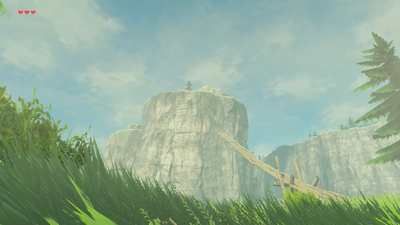 Ankel Island is part of a set of islands, located within the Lanayru Sea, although the islands themselves are officially part of the Akkala Highlands. It connects with Knuckel Island to the South by a series of long and narrow bridges. It also connects with Tingel Island to the North. The location itself consists of the large island, as well a small island, just to the Southwest. The area is patrolled by a dangerous Guardian Skywatcher. At the very top of the island, a Blue Lizalfos can be found wielding a Spiked Moblin Spear.

At the east end of the island, on one of the wooden bridges, there is a rock that has a Korok hiding underneath. A second Korok Seed can be collected by lifting the rock on top of the rock structure at the southeast part of the island.

At the southeast end of the island, there are some boulders that can be blown up. Behind it there is a treasure chest with a Blizzard Rod. A second treasure chest can be found on the smaller island to the southwest. It is at the southeast part of the island, way down below, hidden underneath some rocks. Link can move the rocks with Magnesis and then open the chest to get a Topaz gem.

There's a rock on top of the pillar that you should pick up.

Pick up the rock on the wooden platform just down the cliff.

Just down the cliff is a wooden platform with a rock on it. Pick it up.