The Ancient Cistern is the fourth Dungeon in Skyward Sword. 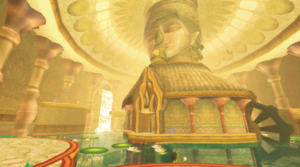 The Ancient Cistern is a tranquil, water-filled room with a Hindu-style statue dominating the central area. However, the same process which purifies water for the upper levels dumps sludge in the lower floors. Thus, the lower area is infested with Cursed Bokoblins, while the upper level features several water and fire-based enemies.