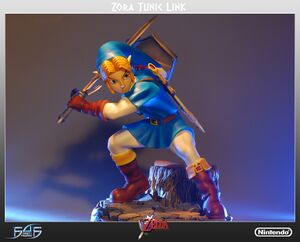 Link is wearing the distinctive blue Zora Tunic which allows him to breath underwater. He can either buy this from the Zora's shop or he is awarded it from King Zora after Link helps him.

First 4 Figures is hugely proud to present Zora Tunic Link from the Ocarina of Time game! His pose shows him winding up for his signature spin attack.

Comes packed in a foam interior full colored box with a card of authenticity. Highly limited at only 1,250 pieces available worldwide. Looks fantastic when displayed with the other statues in the range.

Goron Tunic Link and Zora Tunic Link are being produced at the same time so if you place an order for both statues on our website, you are guaranteed a matching pair of numbers. Low numbers are given on a first come first served basis so order early.

Please note, if you already have any other statues in this series and are expecting the receive the same number, please make sure you have authenticated your previous statues.[1]