From Zelda Dungeon Wiki
Jump to navigation Jump to search
Want an adless experience? Log in or Create an account.
Zirco Mesa 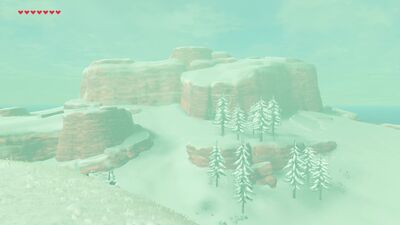 The Zirco Mesa is a location in Breath of the Wild.

The Zirco Mesa is one of the higher elevations in the snow region of the Gerudo Highlands. As with most of the region, the temperature is bitterly cold, requiring Link to wear armor with Cold Resistance, such as the Snowquill Set.

Just northwest of the Mesa, there is a fairly large enemy base that has some Blue Bokoblin, Black Bokoblin, and Ice-Breath Lizalfos. There is a wooden treasure chest at the top of the camp that contains ten Arrows. The camp itself looks down to the west, as there is a gradual slope, leading up to the Zirco Mesa. Just to the east of the camp, there is a large bridge that connects the Zirco Mesa with the Laparoh Mesa to the north.

On the highest plateau on the mesa, there is a small rock that Link can pickup to find a Korok. A number of other Koroks can be found on the outskirts of the area, down the sides of the cliffs of the mountain. A block puzzle can be found way down the cliff to the southeast. A bit northeast of the Mesa, on the lower elevation, the is a circle of rocks with one nearby rock missing. Similarly, there is another circle of rocks on a lower elevation just southwest of the Zirco Mesa.

Just northwest of the Mesa on the lower elevation, there is a bombable wall that leads to a cave beneath the Mesa. This area is littered with Ice Keese and has a number of Luminous Stone Deposits. A Dragonbone Moblin Club can be found sitting on the higher ledge within the cave.

There are a handful of treasure chests to be found in the region, with a variety of goods. 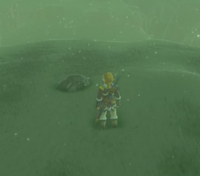 At the top of this section of the mountain, lift up the small rock.

A circle of rocks on this ledge on the side of the mountain is incomplete. Grab the rock from the ledge slightly higher up and bring it down to the ring and complete the circle of rocks. Level 2 Cold Resistance recommended