From Zelda Dungeon Wiki
Jump to navigation Jump to search
Want an adless experience? Log in or Create an account.
Yarna Valley 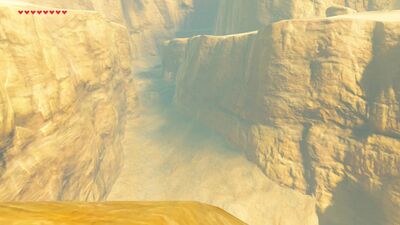 Yarna Valley is a location in Breath of the Wild.

The valley is found just southeast of Spectacle Rock and southwest of Mount Hylia on the Great Plateau. When traveling on the main road through the Gerudo Canyon Pass, there is an enemy skull base to the southeast. It contains some Red Bokoblin, Blue Bokoblin, and Black Bokoblin. After defeating all of the enemies, Link can get a treasure chest that contains a Knight's Shield. Just behind the base is entrance to the valley.

The valley is a steady upward slope leading up to higher elevations of the mountain, near Spectacle Rock. The valley wraps back around and heads northward along the side of Spectacle Rock. A bit further there, there is a more gradual include, making for a great way to initially reach the Wasteland Tower. The valley has enemies found throughout, with Electric Chuchu and Lizalfos being the most common. Electric Keese and Stalmoblins will appear in the evening hours. Electric Lizalfos will appear at the higher elevations of the valley.

Not counting the rock in the middle, two of these lines have only eight rocks in them. Put the two extra rocks at the east and southwest arms to finish the pattern.

Not counting the rock in the middle, each arm of the pinwheel pattern has nine rocks, except for two: the southwest and east ones. Fortunately there are also two spare rocks here. Put them at the end of the spokes to complete the pattern.

Solve the Magnesis block puzzle. Match the design by placing a block in the row to the south.