Skull Kid had become friends with the Giants that created the four lands of Termina: swamp to the south, mountains to the north, oceans to the west, and canyons to the east. When they finished, they started to leave, but the Skull Kid tried to stop them. After they left, he started causing trouble with two fairies: Tael and his sister Tatl. The Skull Kid desired power, so stole Majora's Mask from the Happy Mask Salesman. Skull Kid became possessed by Majora's Mask's becoming its puppet, he wreaked havoc among the natives of Termina and attempted to bring the Moon crashing onto the land destroying and killing every living thing. Link managed to stop his plans by calling the Giants, at which point Majora released the Skull Kid from his grasp. After defeating Majora's Mask, Link and the Skull Kid became friends.

In the Wiki I am currently working on

feel free to help out

My favourite Zelda game is Majora's Mask followed by wind waker and oracle of ages. I have completed 4 zelda games, played 6 others and watched the video walkthrough of 4 more. 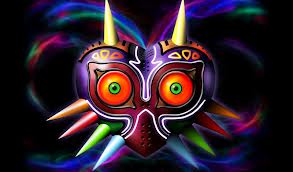