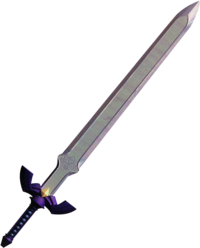 Hey! Listen! I'm MasterSword64, a Zelda Dungeon user. I enjoy playing Zelda, writing fiction and fanfiction, reading, coding, and filming. I'm currently working on some pieces of Zelda fanfiction. I particularly enjoy Ocarina of Time, closely followed by A Link to the Past I also enjoy The Legend of Zelda and Breath of the Wild. I love Zelda Dungeon, and I primarily edit or add articles on Ocarina of Time, A Link to the Past, and the Timeline, as well as any missing or misspelled information on other pages. I love hidden secrets, fan theories, fanfiction, and the beautiful lore of the Zelda series.

I love every Zelda game that I've ever played. Now, to be honest, that's not saying much due to the fact that I've only played four Zelda games. But I loved them all.

I love the Great Deku Tree dungeon not only because it's designed well, but also because it truly gives you motivation to complete the dungeon. The guardian deity of your tribe will die if you fail. Your friends will die if you fail. The forest will die if you fail. However, the Deku tree's death is really a sad part of the game to me. You were on a quest that I couldn't win. And the Deku Tree knew it all along. It's sad, but he rewards you with the Kokiri Emerald. Another neat thing about the Deku Tree is the low, woodwind music. The music appears again in the House of Skulltula. This is interesting, as both of these locations feature a heavily arachnid influence.

I like the King Dodongo because of the theme of the dungeon, the strategy involved, and the lack of hand-to-hand combat. I liked the way that he fit into the whole theme of the dungeon, which is essentially about fire and lizards. So what did they do for a boss? A really big fire lizard. Perfect fit, if you ask me. The second reason is the strategy. One of the primary elements of the dungeon is the introduction of Bombs. You have to Z-target him and throw a bomb in his mouth to stun him, and then you slash him. If he rolls, just crouch with your shield. If he blasts fire at you, you obviously didn't stun him, idiot. Repeat that a few times and he's dead. I like the strategy because it's continuous, as there aren't any phases. The third reason is the lack of hand-to-hand combat. You just really throw bombs at him. I mean, you technically need to slash him with your Kokiri Sword, but he doesn't slice back. That's why he's my favorite boss. 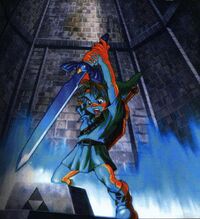 You just need to look at my username. MasterSword64 symbolizes the fact that I like Ocarina of Time and that I like the Master Sword. Put those together, and you get the triumphant moment where you pull the Master Sword from the Pedestal of Time in the Temple of Time. You're super excited, because your next move is to go kick Ganondorf's butt. Then you turn around and he's just standing there, like, "Hey, thanks for beating all those dungeons that I made for you. Now that yo`u get the Master Sword, I'm just gonna take this Triforce over here, and you can take a nap for a few years." It's really annoying, but not annoying enough to take the joy from getting the sword. 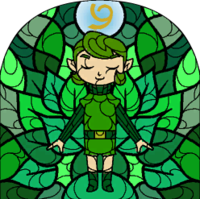 I feel that the most underrated Ocarina of Time character is Saria. She's really a pivotal character and has deep feelings for Link, but she doesn't get the attention as a character that she deserves, clouded by other characters that appear more often. I appreciate how she shows innocence and compassion in the game, re-characterizing the way games are made now.

[[File:Master-Craftsmans-Son.png|200px|right] If I had one, why would I even be on this website? I love Zelda games!

I like the King Dodongo, but I don't like the Dodongo's Cavern because of some of the enemies. I don't really feel that the Beamos fit the dungeon's theme. Also, I don't like Fire Keese. You can only target them when they're near enough to hit you, and they always come in pairs of two. They're almost impossible to hit without targeting because they move a lot and come at you fast when they choose to attack. So, in reality, I don't like the dungeons because of the enemies. I know it's a weak reason, but it was the only one that I found annoying.

It actually took me a while to beat the Deku Tree, solely because I couldn't beat Queen Gohma. She was a pain. She's essentially only vulnerable in the eye until she's stunned, which is really annoying. At that time, I was new to the game, didn't really get Z-targeting, and sucked at the Fairy Slingshot. She was hard to beat, but easily accessible after you fall through the web. My close second is Moldorm from A Link to the Past. It took some time to kill him because he keeps shoving you off the platform. Jerk. Also, his tail is his only vulnerability. I guess that I don't like bosses with only one weakness. 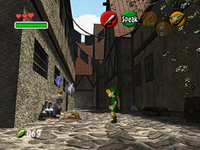 The Wounded Soldier isn't actually an important character in Ocarina of Time. In reality, most players miss him, since he only appears in one place in one time when no one would think to go there. When you talk to him, he tells of Ganondorf's raid of the Hyrule Castle. However, one of my favorite theories is that the Soldier is actually a spy for Ganondorf. While this might seem weird, it's actually my favorite because it's a redemption story. My second favorite is the death of the Great Deku Tree, because you fought so hard to save the tree, but he knew that he would die in the end. He gives you the Kokiri Emerald and sends you to meet the Princess of Destiny. It's really sad that he dies. 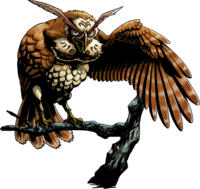 Look, I don't really have much against Kaepora Gaebora other than the fact that he's really annoying. Every time I enter Zora's Domain or the Gurudo Valley, he shows up and monologues and then flies away. Sure, he gives useful hints and can carry you to hard-to-reach places, but he sometimes gets monotonous when you have to go into a place more than once and you have to listen to him talk and talk and talk and talk and talk... 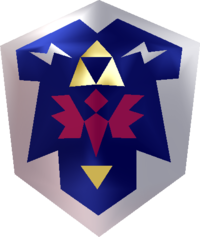 I love Zelda theories! But I guess that I have to have a favorite. I chose the Tetraforce theory because I love the idea of there being another piece out there, and the Fierce Deity having something to do with it. The other theory that I like is the The Wounded Soldier Theory, which theorizes that the Wounded Soldier is a traitor to the throne of Hyrule. I'm currently developing some fanfiction on it.

It is proven that Link gets married because the Link from Twilight Princess is a descendant of the Ocarina of Time Link. I personally think that it would be Malon. If you want more information on that, read a neat Zelda Dungeon Article here. 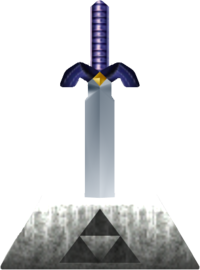 If you're reading this, I'm hoping that you read all the stuff above it. If you didn't, don't. It's not worth your time. Anyway, thanks for reading my user page. Have fun adventuring!