From Zelda Dungeon Wiki
Jump to navigation Jump to search
Want an adless experience? Log in or Create an account.
Twilit Bloat 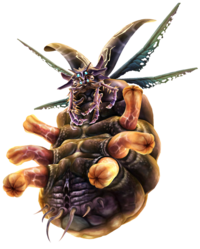 Feeder of Darkness: Twilit Bloat,[1] more simply known as the Twilit Bloat, is a Mini-Boss that appears in Twilight Princess. It is a giant Shadow Insect who is abnormal compared to the other shadow insects.

The Twilit Bloat is encountered after Link has acquired the Vessel of Light from Lanayru, the Light Spirit, and has collected the first fifteen insects. After collecting the fifteenth one, Midna will be bewildered because the final one isn't on Link's map. However, it will appear on the map right after she says this, and will appear in the middle of Lake Hylia.

Twilit Bloat flies around and electrifies itself, and when the Twilit Bloat flies towards Link, he can just move away in order to avoid being hit by it. When its electricity goes away, Wolf Link can jump onto its body and attack it furiously. It will then fall down in the water and swim around. After three times of attacking it, the Twilit Bloat will fall down on the water stunned. Wolf Link can attack it by using Midna's charge attack. After that, it will be defeated and Link can collect the final Tear of Light and subsequently fill the Vessel of Light.

The Twilit Bloat resembles a Giant Isopod, which is a type of sea crustacean that lives in the West Atlantic off of Georgia (USA) to Brazil, including also the Gulf of Mexico and the Caribbean.