The Legend of Zelda: The Wind Waker - Link's Logbook (Manga)

From Zelda Dungeon Wiki
Jump to navigation Jump to search
Want an adless experience? Log in or Create an account.
The Legend of Zelda: The Wind Waker - Link's Logbook (Manga) 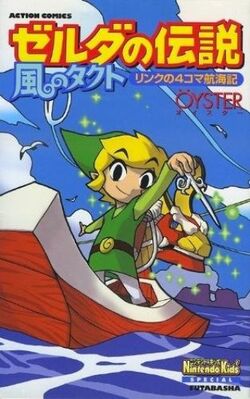 This manga is an adaptation of The Wind Waker, and it parodies certain scenarios in the game. This manga is a yonkoma manga (four cell manga or 4-koma for short), and it is read from right to left. This manga does follow the basic story of the game and takes Link through familiar locations, but it skips most dungeons and scenes to the very peak of the stories. It was released in Japan on October 28, 2003, by Futabasha.

The Legend of Zelda: The Wind Waker - Link's Logbook is a record of Link's journey. On his travels, he meets many unique people, and gets into many different varieties of trouble before finally confronting his destiny.