The Legend of Neil

From Zelda Dungeon Wiki
Jump to navigation Jump to search
Want an adless experience? Log in or Create an account.
The Legend of Neil 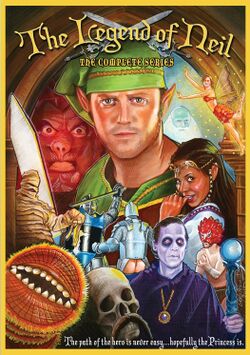 The Legend of Neil is a web comedy series produced by Effinfunny.com, Atom.com, and Comedy Central. This series was created by Sandeep Parikh & Tony Janning, and it is a parody of the original The Legend of Zelda.

This series follows the reluctant adventures of Neil, a gas station attendant from Jersey who gets sucked into The Legend of Zelda and has to fight his way out.[1][2]

Beer-guzzling slacker Neil Grimsley is accidentally being sucked into the fantasy video game The Legend of Zelda when he masturbated to the fairy in the game, and then asphyxiated with a Nintendo game controller.

In Hyrule, Neil is immediately charged with the task of defeating the evil Lord Gannon and saving Princess Zelda. In his journey, Neil encountering many other characters such as Old Man, Fairy, Wizzrobe, Goriya, and much more.

Armed with nothing but a shoddy Wooden Sword and a gigantic hangover, he has to fight his way out.

Here is a listing of a full cast for The Legend of Neil.[3][show][hide]

A DVD version of The Legend of Neil was released on December 4, 2012. It contains all 20 episodes from three seasons of this series, all minisodes, and includes never-before-seen bonus footage including a behind-the-scenes featurette with insider tips on how to make your own web series. This DVD run time is about 154 minutes. As of September 27, 2012, this DVD can be pre-ordered at Amazon.com.[4]