From Zelda Dungeon Wiki
Jump to navigation Jump to search
Want an adless experience? Log in or Create an account.
Teebo 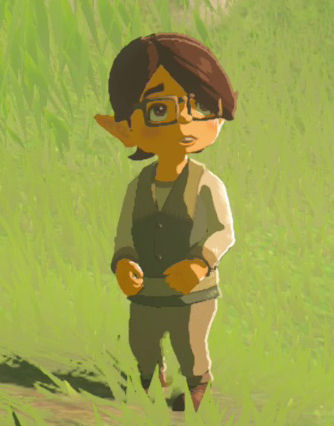 Teebo is a character in Breath of the Wild.

Teebo lives in Hateno Village with his mother, Tamana, who can be found raising Cuccos. They live at the northwest side of town, just north of the Ventest Clothing Boutique. He wakes up at 8am each morning and during the daytime, Teebo can be seen running around near the west entrance of Hateno Village. When Link speaks with Teebo he will ask Link he'll state that he found something near and asks Link to follow him.[1] Teebo will run to the southwest part of town, near the Firly Pond.[2]

Teebo will lead Link to the Horned Statue. He mentions that it looks just like the Goddess Statue located just outside of the Chiefs home.[3]

After Link talks to the Horned Statue, Teebo will be confused, asking if Link was talking to the statue. After admitting that he was, Teebo will get excited, while still calling Link weird.[4] Teebo will then run off and play in the main part of town again. He will run around oto various locations, kneeling down and examining what is on the ground. He continues doing this throughout much of the day, only returning home after 8pm each evening.[5][6]

Link can talk to the Horned Statue to begin The Statue's Bargain side quest where he can trade a Heart Container for a Stamina Vessel, or vice versa.[7][8]