From Zelda Dungeon Wiki
Jump to navigation Jump to search
Want an adless experience? Log in or Create an account.
Snowpeak Ruins 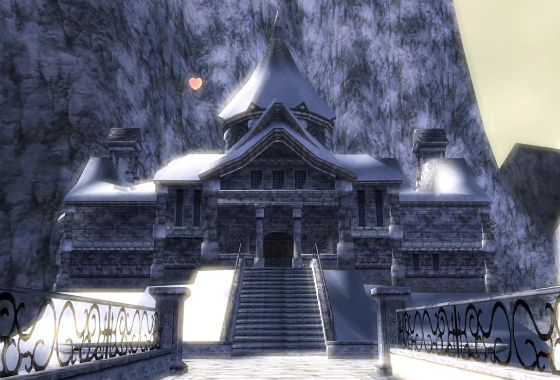 Once Link reaches the summit of Snowpeak, he meets up with Yeto, who has a Reekfish in his hand. The large Yeti says it is rare to see a human on the mountain,[2] and asks Link what he is doing here, making a joke about a spiritual journey.[3] Link responds by telling Yeto he is looking for the Mirror Shard. Yeto tells Link he has the Mirror Shard, which he gave to his wife as a gift[4] so he and Link sled down the steep mountain to the Snowpeak Ruins, Yeto's home, an old house surrounded by snow.[5]

Link enters the Snowpeak Ruins and meets Yeta, who tells him she got sick because of the Mirror.[6] She also tells the young hero that the Mirror is in the bedroom, and that it has been locked away.[7] Yeta then marks the location of the key on Link's map so he can find it.[8] However, the location she told Link doesn't house the key, but it houses the Ordon Pumpkin. Upon telling Yeta what happened, she tells Link of a second location,[9] and a real challenge comes with a battle with a huge armored knight swinging a Ball and Chain, known as Darkhammer. After beating him Link will arrive at the location of the second key, but this room also doesn't contain the Bedroom Key. It contains a chest that houses the Ordon Goat Cheese. Yeta then gives Link a third location,[10] and this one is finally the one that houses the key. With the Bedroom Key now in hand, Link, along with Yeta, travel to the bedroom where the shard lies.[11] However, Yeta appears to get possessed by the mirror and turns into Blizzeta, the Boss of the dungeon. Link must defeat Blizzeta to gain the second Mirror Shard.

Listed below are all the enemies that Link encounters as he searches for the Bedroom Key throughout the Snowpeak Ruins. 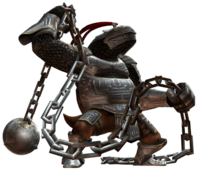 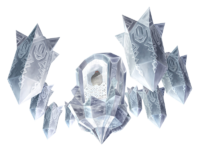 Twilit Ice Mass: Blizzeta is the Boss of the Snowpeak Ruins. Blizzeta is the form Yeta takes after she has been possessed by the Mirror Shard. The battle takes place in the bedroom of the Snowpeak Ruins, the only room that lies on the third floor. Since the entire dungeon has been ice-based, it is most appropriate for this battle to be the same. In both phases of this battle, Blizzeta guards herself using large ice blocks that are very hard to penetrate. The only way Link can hit Blizzeta hard to enough to destroy the ice is with the Dungeon Item of the Snowpeak Ruins, the Ball and Chain. After defeating Blizzeta, Link is rewarded with the first Mirror Shard and a Heart Container. Shortly after, Yeto enters and when he sees Yeta on the floor, he runs to her, and tells her to forget about the mirror and looks into Yeto's eyes.[12]. They embrace, and suddenly hundreds of Recovery Hearts start popping out of them until finally, a Heart Container pops out as well.

As usual with dungeons in Twilight Princess, the Snowpeak Ruins contain three of the basic Dungeon Items. The Dungeon Map, the Compass, and the Small Keys. However, the Big Key is renamed and restyled as the Bedroom Key.

The Dungeon Map is given to Link by Yeta very early on in this dungeon. It is used to show Link how the mansion is laid out. It shows every room in the dungeon, as well as the shape and size of each room. Yeta shows Link the location of the Bedroom Key by putting a symbol on the map. Link must go to that particular spot, so the map is very useful if he ever gets lost or even just to refer to every once in a while.

The Compass can be collected by Link in a room that has long narrow paths, which make it very difficult to travel through the room to get the far end of it, where the chest that contains the Compass lies. The Compass does two very useful things for Link. Firstly, it shows him the location of every Treasure Chest that is located in the dungeon. Secondly, it shows Link the locations of every Cannonball that he can use with a Cannon.

The Bedroom Key is the only item that can unlock the door that leads into the bedroom of the Snowpeak Ruins. Yeto and Yeta hid the key after they locked away the Mirror Shard in the bedroom. Yeta tells Link the location of the key, and then asks the young hero to take the mirror away.

There are four hidden Small Keys located in the Snowpeak Ruins. They all can unlock a door that was previously blocking Link's way through the dungeon.

There are 17 Treasure Chests located in the Snowpeak Ruins. These chests all contain certain valuable items that will greatly help Link along his quest. These items are Rupees, Dungeon Items, Regular Items, Equipment, and Pieces of Heart.

Of the seventeen treasure chests that can be found in the Snowpeak Ruins, only two contain Regular Items. Both chests contain Bombs, 5 each to be exact. They are found here mainly to give Link an extra hint on how to work a Cannon, which are common in the Snowpeak Ruins.

Two treasure chests in total contain any sort of equipment in the Snowpeak Ruins. The first of these chests contains the Ordon Pumpkin. The second houses the Ordon Goat Cheese. Both these items are used to help make Yeto's soup better.

As is the usual for Twilight Princess dungeons, the Snowpeak Ruins houses two Pieces of Heart. One requires Bombs to get, while the other requires the Ball and Chain.