From Zelda Dungeon Wiki
Jump to navigation Jump to search
Want an adless experience? Log in or Create an account.
Shadow Beast 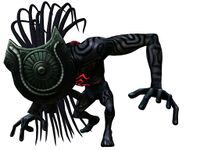 The Shadow Beast is an enemy encountered in Twilight Princess. They are Twili members who were turned into mindless monsters by the twilit enemy Zant and became servants for him. They typically come in groups of three to five. The final two beasts must be defeated simultaneously; if not, the remaining Shadow Beast lets out a screech, reviving the ones that Link has already eliminated. Due to this, Link must perform the Spin Attack or, in his wolf form, use Midna's charge attack to take them out at once.

When entering Hyrule, Shadow Beasts typically fall from a red portal in the sky. They then form a force field around Link, preventing him from escaping. Any Shadow Beasts around Link then proceed to attack him in a pack-like mentality. After Link defeats them, the force field disappears and the Shadow Beasts shatter into several pieces, which form a new green Twilight Portal. This portal can be used by Midna to warp Link to that specific location.

In the Palace of Twilight, Shadow Beasts do not often appear in groups, nor do they set barriers. Instead, they usually swarm Link separately.