From Zelda Dungeon Wiki
Jump to navigation Jump to search
Want an adless experience? Log in or Create an account.
Sealed Grounds 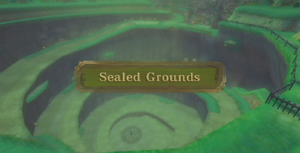 The Sealed Grounds, also known as Hylia's Realm in the past, is the first location that Link visits beneath the clouds in Skyward Sword.

This is a very important place in Skyward Sword, and Link revisits it very often. It is located in the Faron region, near the Faron Woods area. Since it is next to the woods, it is in a forest. It has also an ancient temple known as the Sealed Temple, a huge spiral hole, and some markings on the way down to the bottom on the hole. The markings tell the story of the war and the creation of Skyloft. Further in the game, the hole will be filled with the part of Skyloft where the huge Statue of the Goddess was. The name "Sealed Grounds" come from the seal of a demon king named Demise. He is sealed in the bottom of the hole. The Sealed Grounds has two Bird Statues. One called "Sealed Grounds", on called "Behind The Temple" which is behind the Sealed Temple.

The location of the Sealed Grounds on the map

Link visits this place very early in the game. When he first lands on a pathway next to the spiral hole with the Sailcloth, he fights two Deku Babas. At the end of the pathway, there is a temple with a Sheikah marking on. In here, Link will find an old woman. She is the protector of the Sealed Temple. She tells Link where to find Zelda.

The Imprisoned, Groose, and the Sacred Flames

After the three first dungeons and a short meeting with Zelda, Fi suggests that they visit the Sealed Grounds. When Link dives down, Groose will dive after him and come beneath the clouds too. He will then get a good explanation of the land below and that he is not the hero to save Zelda. Shortly after that, a roaring suddenly appears from outside. This is the first meeting with The Imprisoned. Link will fight and seal this monster for a little while. The old woman will tell Link about The Imprisoned and the Gate of Time. She will sing while Link plays the Goddess's Harp and teach him the Ballad of the Goddess. The Gate of Time will appear, unopened. Link will then have to find the three Sacred Flames to give his Sword enough power to open it and make it work. Groose is sad, because he felt useless against The Imprisoned.

The Gate of Time and Zelda

When Link lands in the Sealed Grounds after gathering the Sacred Flames, The Imprisoned's seal will break once more, and Link must seal it again. This time, Groose helps with the Groosenator. After the monster's defeating, Link will hit the Gate of Time with a Skyward Strike and it will fully open so that he can travel to the past. In the past, the Sealed Grounds are known as Hylia's Realm and the Sealed Temple is the Temple of Hylia. He will meet Zelda, who will explain many things and bless his sword to become the True Master Sword. She will then put herself to sleep for thousand of years, to make the seal on The Imprisoned stronger. Link is now tasked with finding the Triforce and eradicate the Demon King, Demise.

After Link meets Levias, he learns that he must learn the Song of the Hero to find the location of the Triforce. He must gather parts from the three dragons in each region.

If Link lands in the Sealed Grounds to gain the Water Dragon's part of the song, he discovers that The Imprisoned is awakening once again. After defeating it, the old woman explains that Faron Woods is flooded and he cannot open the gate into the forest to find the dragon. Groose helps him by sending him into the sky with the Groosenator.

Once Link obtains the final part of Triforce in Sky Keep, the Statue of the Goddess on Skyloft will fall down into into the large spiral hole, fitting perfectly into its former position on the Surface and sealing The Imprisoned, who is actually Demise, for all of eternity. Zelda awakens and reunites with Link, Groose, and the old woman, but then Ghirahim appears and kidnaps Zelda, taking her into the past through the Gate of Time in hopes of reviving Demise with her power in the past. Link follows him into the past and catches up with Ghirahim. He manages to defeat him, but he is too late, and Demise is revived anyway. He follows Demise through a portal and finally manages to defeat him there.