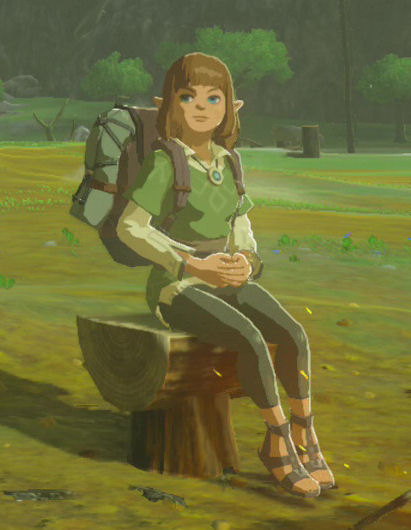 Sagessa is a character from Breath of the Wild who has knowledge about the creation of Elixirs.

During the daytime, from 6am until 8pm, Sagessa can be found sitting next to the Cooking Pot at the Dueling Peaks Stable. She mentions that it's not too often that there are travelers around here. She speaks highly of the Dueling Peaks area, talking about how peaceful it is, in contrast to the dangerous area surrounding Hyrule Castle that is filled with monsters.[1]

Her main purpose is to teach Link about how to make Elixirs and their unique attributes. The first time Link chats with Sagessa, if Link asks her about elixirs, she will give him a Hasty Elixir, and explains that it was created by cooking a Hightail Lizard with a Bokoblin Horn.[2][3] After she Link an elixir, Link can once again ask her about elixirs. This time however, Sagessa will not give Link another elixir. [4]

At 8pm in the evening, Sagessa will walk over to the Ha Dahamar Shrine. After Link has completed the shrine, she mentions that it only recently started glowing. She knows that the shrines have been around for around 10,000 years and sometimes feels that there are shrines everywhere behind every hill. While looking at the shrine, she sees the light as being romantic.[5]

Sagessa will make the observation that there are mostly twins at the Dueling Peaks Stable.[6] Given the nature of the region and stable, this makes sense, as everything comes in pairs. The two twins that run the stable are Tasseren and Rensa. Rensa has two twin sons, Darton and Shibo. The two twin-bandits in the stable are Prissen and Domidak.

At any point if it starts to rain, Sagessa will run over to take cover at the Dueling Peaks Stable. She talks about how the Sheikah who live in Kakariko Village have special clothing that allows them to work in the rain. She will give Link directions on how to reach the village.[7][8][9]