From Zelda Dungeon Wiki
Jump to navigation Jump to search
Want an adless experience? Log in or Create an account.
Rock ChuChu 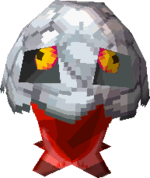 Rock ChuChu as it appears in Phantom Hourglass

Rock ChuChus are recurring enemies in The Legend of Zelda series. They are one of the many variations of the ChuChu family.

Rock ChuChus are found mainly on Mt. Crenel and Veil Falls. To defeat them, Link must break their helmets by either throwing a bomb on it or by breaking it with his sword once he has gained the Rock Breaker ability.

Rock ChuChus are Red ChuChus concealed within boulders. They can be defeated after Link removes their rocky shell with Bombs, Bombchus, the Grappling Hook, or the Hammer.