This article is about the character in Ocarina of Time. For the town in The Adventure of Link, see Town of Rauru. 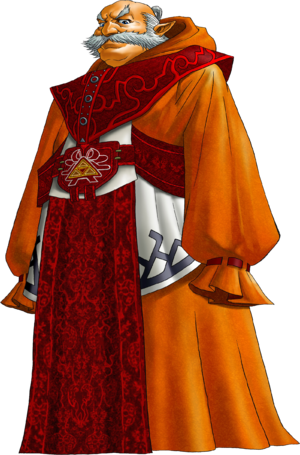 Rauru is one of the Seven Sages in Ocarina of Time and the true form of Kaepora Gaebora.

After Link wakes up from his seven-year slumber, he encounters Rauru in the Sacred Realm. Rauru proceeds to explain why Link was trapped in there for seven years, and also tells him that while he slept, Ganondorf had free access to the Sacred Realm and consequently to the Triforce. He then gained the power to take over Hyrule. Finally, he reveals Link's destiny: to become the Hero of Time. Then, he tells Link to find the other Sages and add their power to his own, giving him the Light Medallion.

Later in the game, it is Rauru who tells Link to return to the Temple of Time after awakening all of the Sages. Also, at the end, Rauru helps seal Ganon away in the Dark Realm.

Given the appearance of Kaepora Gaebora, Rauru is shown to be present in Termina.

Even though Rauru does not make an appearance physically in-game, a stained glass window of him can be seen in Hyrule Castle, along with the Stained Glass of the other Sages.