From Zelda Dungeon Wiki
Jump to navigation Jump to search
Want an adless experience? Log in or Create an account.
Raid on Ganon's Castle 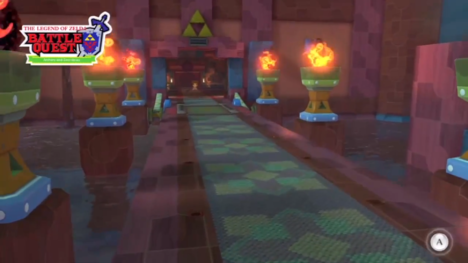 Raid on Ganon's Castle, also referred to as Storming Ganon's Castle, is the ninth level featured in Battle Quest. It is the final level in the standard levels of the game.

In the first area, the player will encounter a pair of Kargaroks, a series of Tektites, and a couple of Moblin Archers. Some White Shield Moblins and Pot Shield Moblins are soon to follow, along with a pair of Stalfos. After defeating the Stalfos, an Armored Wizzrobe will appear. This battle is identical to when the player fought the Armored Wizzrobe as the boss of the Gerudo Fortress Trail.

The second area takes place in a dark cave where the player fights a series of Keese, Green Club Moblins, and some Quick Moblins. When the player gets back outside for the third area, they'll take on a series of more difficult Pink Shield Moblins in combination with some Moblin Archers. After defeating some more Stalfos, the player will need to perform a Spin Attack to hit all four Crystal Switches to advance to the fourth area of the level.

The player will encounter the dungeon boss in the form of Ganon. Ganon wields a pair of Tridents and will swing them at the player. These must be blocked using Link's Shield. In between Ganon's attacks, the player will be able to get in a sword swipe of their own. Ganon has the ability to teleport and after taking damage he will do just that, creating separation between himself and the player. While at a distance, Ganon will toss three spiked spheres towards the player. The player will need to perform a vertical or horizontal sword slash to defeat these spiked spheres. Blocking them with his shield will leave the player vulnerable momentarily, causing the next Sentrobe Bomb to harm him. After defeating Ganon, the player will acquire the Triforce.