From Zelda Dungeon Wiki
Jump to navigation Jump to search
Want an adless experience? Log in or Create an account.
Prissen 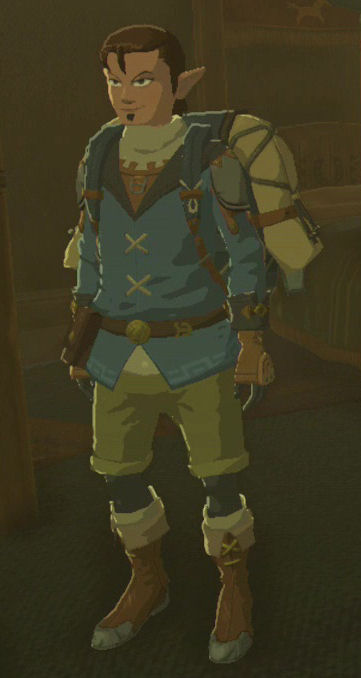 Prissen is a character from Breath of the Wild who has knowledge about the creation of Elixirs.

Prissen can be found alongside his older brother Domidak at the Dueling Peaks Stable. They look and dress the same, other than the colors of their clothing, with Prissen wearing a blue shirt and some light brown pants. He refers to his brother as Dak and thinks very highly of him. The two are treasure hunters and have the scoop on a nice treasure nearby.

When Link first finds the two brothers, he overhears them talking about Misko's treasure.[1][2] After realizing that Link can hear what they are saying, they stop chatting before giving more details.[3][4][5][6]

Link can chat with Domidak again, at which point the brothers quickly realize that Link knows too much about Misko's treasure. The two will gives about a nice treasure haul, but won't give Link all the information. Instead, they try to sell the information to Link at the cost of 100 rupees.[7][8][9][10][11][12]

If Link declines the deal, the two brothers don't seem upset.[13] However, Link can chat with them again at anytime to pay the 100 rupees and get the hint on the treasure. If Link pays the 100 rupees, Domidak will tell him a riddle about the treasure. Link must travel over the two nearby bridges and find a cave at the top of the river's source to the south.[14][15]

If Link claims that he solved the puzzle, before actually finding the treasure, Prissen will accuse him of lying, saying that there is no way a rookie can figure out the solution before his big brother.[16]