From Zelda Dungeon Wiki
Jump to navigation Jump to search
Want an adless experience? Log in or Create an account.
Powder Keg 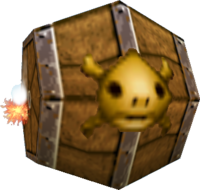 The Powder Keg is an item from Majora's Mask.

It is a barrel filled with explosive, and a famous product among the Gorons. They are crafted by Medigoron, the owner of the Goron Powder Keg Shop in the Goron Village. They can be purchased for 100 rupees from Medigoron, or 50 rupees from the Goron in the West Clock Town Bomb Shop; 20 Rupees in the 3DS version. To be able to purchase one, Link must be in Goron Link form, and have obtained a license from Medigoron by using a Powder Keg to destroy the boulder outside the Goron Racetrack.

They can only be used while wearing the Goron Mask. Their uses are to explode giant obstacles that appear rarely. One is the boulder blocking the entrance to Romani Ranch, another is a cracked ceiling blocking light from going through the ceiling of the Ancient Castle of Ikana, the other one being in Snowhead, blocking the path into the Goron Racetrack. Link can only carry one Powder Keg at a time. It has a long fuse, but can be destroyed more quickly by shooting it with an arrow.