From Zelda Dungeon Wiki
Jump to navigation Jump to search
Want an adless experience? Log in or Create an account.
Penny Arcade Presents The Legend of Zelda: Skyward Sword 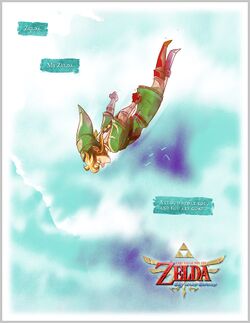 Penny Arcade Presents The Legend of Zelda: Skyward Sword is a five-part promotional web comic based on The Legend of Zelda: Skyward Sword. The comic was written and illustrated by Mike Krahulik and Jerry Holkins, under their Penny Arcade Presents series. It was published on the game's official website starting November 15, 2011 until December 13, 2011. The story is narrated by Gaepora, the father of Zelda.[1]

Krahulik writes that he painted a watercolor version of Link before working the art into a recolored digital piece, which he submitted to Nintendo. Both Nintendo and Aonuma liked what they saw, leading to the launch of the official comic, which seems to mash up Krahulik's signature style and Skyward Sword's design sensibilities pretty evenly so far.[2][3]