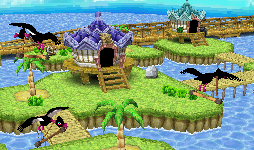 Papuchia Village (Papuzia Village in the European/Australian version) is a location Link can visit in Spirit Tracks. It is located in the Ocean Realm right after crossing the bridge from the Forest Realm, and is the most inhabited village there. The village is made up of several different islands connected together through wooden bridges. Many birds fly around this island, and the Lokomo Carben, the sage who lives in the Ocean Sanctuary, enjoys to come here to talk with his sky friends.

In total, there are four Force Gems that can be obtained on this island.

One of the men living in Papuchia Village had been kidnapped by pirates from the Pirate Hideout, and taken there as prisoner. After Link obtains the Force Gem from the Fish Saleswoman, that Force Gem will reveal Spirit Tracks leading to the Pirates' Hideout. If Link rescues the man from all the pirates through a mini-game, he gives him a Force Gem, creating easier and shorter travel in the Ocean Realm.

The girlfriend of the man captured by the pirates had become impatient with her partner's return, and decided that she doesn't love him anymore. She enlists Link's help in finding her a new boyfriend, saying that he must have a beard, a large nose, and a rugged appearance. If Link brings her the Whittleton Chief from Whittleton, the two immediately fall in love and get married, giving Link another Force Gem. This Force Gem reveals tracks in the Forest Realm.

If Link goes to the Wise One, the village elder, she will tell him his future. At one of his readings, she will say that he is being haunted by evil spirits and needs something to help banish them. She conveniently has an expensive urn to sell him, costing 50 Rupees. Link must transport the urn to Steem in the Snow Sanctuary in the Snow Realm. If Link gets hit by any attack along the way, the urn will immediately break. When he goes back to Papuchia Village to buy another one, the price has doubled, now a large 100 Rupees.