From Zelda Dungeon Wiki
(Redirected from Octoroks)
Jump to navigation Jump to search
Want an adless experience? Log in or Create an account.
Octorok 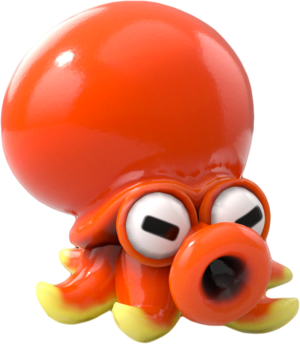 Octoroks are recurring enemies in The Legend of Zelda series. They appear in every game except Twilight Princess. They highly resemble octopi from the real world. They generally spit rocks and have been found as both land- and water-dwelling enemies.[1]

In The Legend of Zelda, Octoroks are enemies all around the Overworld that shoot rocks[2][3] at Link. The rock attack and contact will each deal half a heart of damage. Octoroks come in two colors, red and blue. The blue Octoroks take two hits to defeat with the original Sword, as opposed to the red variety, which is defeated with only one swipe of the sword.

In The Adventure of Link, Octoroks once again come in two varieties.

Red Octoroks are primarily found in the Caves and swamps of Western Hyrule, attacking by leaping in the air and spitting rocks at Link. Red Octoroks yield 10 experience points when defeated.

Blue Octoroks are found in the deserts of Eastern Hyrule, on the path to the Mountain Town of Darunia, and on Maze Island. Link earns 20 experience points for destroying a Blue Octorok.

Despite their primary attack being the actual rock that they shoot out, simply contacting an Octorok does a full heart of damage, while the rock itself only does a 1/2 heart of damage. One swipe with the Fighter's Sword defeats an Octorok.

Octoroks in Link's Awakening appear all over Koholint Island and are some of the most common enemies in the game. If they spot Link, they shoot a rock in his general direction. They also appear in another form where they have wings, called the Winged Octorok. Winged Octoroks are less common than the regular Octorok. If Link tries to charge at them and attack, they jump and float in the air for a few seconds.

Artwork of Octorok from Ocarina of Time and Majora's Mask

Octoroks appear as aquatic enemies in Ocarina of Time. For this reason, they are found in nearly any place that has water. They usually lurk under the surface of the water, but when Link gets within their range, they pop up and spit rocks at him. If Link gets too close, they retreat back into the water. They can be defeated with the use of any long-ranged weapon or by deflecting the rocks they spit, with either the Hylian or Deku Shield. The Mirror Shield destroys their projectiles instead of returning them.

A larger version of an Octorok called Big Octo is the mini-boss of Inside Jabu-Jabu's Belly.

Octoroks in Majora's Mask are identical to their Ocarina of Time counterparts, periodically hopping out of the area in which they sit. They are not a hugely common enemy but are present in nearly every region of Termina. These little enemies shoot rocks at Link when he is in range, which can be deflected by all Shields except for the Mirror Shield. Unlike in Ocarina of Time, these Octoroks take two hits to defeat. A new feature added to this game is that Octoroks can be made into floating platforms if frozen with Ice Arrows. They can be defeated with the Hero's Bow, or any projectile weapon.

There are bigger variations of the standard Octorok called a Big Octo. These large enemies block paths in the Southern Swamp when it is filled with poison. They can be defeated by either taking the boat ride and crashing into them or using projectile weapons to attack them. They take only one hit to defeat. Big Octos suck Link in and spit him out, dealing a large amount of damage. Taking a pictograph of one for the Tourist Guide grants Link 20 Rupees.

These Octoroks come in two colors, red and blue, and they still shoot rocks at Link. Red Octoroks are generally weaker and defeated with one hit of Link's Sword. Blue variations are stronger and take two hits.

Octoroks in The Wind Waker seem much larger than in previous 3D titles, but they can be defeated in much the same way. They are water-dwelling enemies that live in the Forest Haven, the Forbidden Woods and the Great Sea. They come in three different variations: Rock Octorok, Bomb Octorok and Big Octo.

The Rock Octoroks live in the Forest Haven and Forbidden Woods. Like their name implies, their only method of attacking is to spit rocks at Link when provoked. These rocks can be easily deflected by using Link's Shield, defeating them in the process. Link can also defeat them with projectile weapons like the Boomerang or the Hero's Bow. It is impossible to defeat them with just Link's Sword, as they dive under the water if he gets too close.

Bomb Octoroks are only found in the Great Sea, though there are a large amount of them. As their name implies, they shoot Bombs at Link instead of rocks, which, naturally, cannot be deflected with the Shield. Link can defeat them with the Bow, the Boomerang, or simply using Bombs. Link could also just avoid them altogether.

Big Octos are much bigger than normal Octoroks, and also do not attack the same way. They are only found in specific areas around the Great Sea, and have either 4, 8, or 12 eyes. If there is a random flock of Seagulls flying around one spot in the sea, there is a Big Octo there. Once Link approaches one, a whirlpool surrounds him, and the Big Octo rises out of the water. The eyes can be defeated with either the Bombs, the Bow, or the Boomerang. Using the Boomerang requires the most hits, and the Bombs take only one. If Link is not fast enough, the Big Octo sucks him in and spits him out to a random island.

The Octoroks from The Minish Cap are much like the original ones. They are red and wander around in Hyrule Field. They shoot rocks at Link and can be dealt with by shooting arrows, bombing or just slashing them with Link's Sword. The boss in the Temple of Droplets is a normal Octorok, since Link was minimized the enemy appears to be huge.

In Phantom Hourglass, Octoroks return to their land-based appearance from The Legend of Zelda. They are small red ball-like monsters with four small legs and they move around on land, shooting rocks at random intervals. Some stay in one strategic place (sometimes unreachable, serving as more of an obstacle than an enemy) and shoot rocks forward at regular intervals. They can be defeated with any weapon, except the Boomerang which only stuns them. They are found throughout most of the game, but are present in large quantities in the Temple of Courage, where the bow is found.

Ocean Octoroks are water based variations of the Octorok. They can be annoying at times, especially when encountered in the fog. They stay close to the water and dive under repeatedly, shooting rocks when they reemerge. A single, well-aimed cannon strike will defeat them.

There are two kinds of Octoroks in Spirit Tracks.

Normal octoroks appear in grassy areas, dungeons, and the Take 'Em All On challenge. They continuously shoot rocks and sometimes may shoot unexpectedly at Link while he is off-screen. The rocks can be deflected with Link's shield. Octoroks are easily defeated with Link's Sword.

These appear underwater in the Ocean Realm. They may shoot ink at Link, causing them to mess up the map and leaving Link to clean it off. They can be defeated with the Cannon.

Octoroks are now land creatures and they seem to resemble their counterparts from older 2D Zelda titles. They also have some similarities to Deku Scrubs from previous Zelda games. Octoroks shoot rocks toward Link, but whenever Link comes close, they hide under patches of grass or rock. In order to defeat an Octorok, Link can deflect the rocks back by lunging his shield forward knocking the rock back towards the enemy. Link can also use the Whip to pull the Octorok up from underground for a short period of time, allowing him to slash away with the Sword. 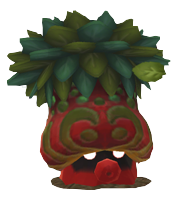 Octorok (Grass) are octopus-like creatures that hide beneath shrub-like camouflage. When Link comes close to the Octorok, it spits out a rock that can easily be deflected with a shield bash or with Link's Sword. They can also be defeated by using the Whip to pull them out of the ground, then slashing at them with the Sword.

Very similar to its Grass counterpart, the Octorok (Rock) shoots projectile rocks at Link from a distance which he must deflect using his Shield or Sword. This version of the Octorok resides in the Lanayru Province. Unlike its counterpart, this Octorok has a mushroom-shaped rock atop its head, which it can hide under if Link ventures too close.

These pink Octoroks live in The Sky around Skyloft, dwelling on the floating rocks spitting projectiles at Link as he flies by on his Crimson Loftwing. These kinds are much bigger than their land-dwelling counterparts, and can be defeated by Spiral Charging at them on the Loftwing.

In this game, Octoroks have much better aim and range, are markedly persistent, and are more dangerous than before. However, they have low hitpoints and are easily defeated with even the most weak weapons. There are multiple types of Octoroks:

The damage produced by Octoroks is affixed, and cannot be altered by the armor worn or by defense effects from food and elixirs.

Octoroks are skittish and defensive creatures which hide under common environmental features, and some have to be lured out to attack in order to defeat them. Albeit they are common nuisances and are largely found in small groups, there are areas in Hyrule which are infested by them, like the forest area west of the Rito Stable, and the Rok Woods.

Some types of Octorok can migrate while hidden under the soil, and will chase Link and reposition themselves in order to attack. When defeated, they may drop their tentacles, their eyeballs, Octo Balloons and may drop fish that they've consumed. Contrary to many other enemies, Octoroks do not have elemental drops related to their type.

None of these features apply to the Sky Octorok, as it has no attacks or drops.

In this game, Octoroks are rather large octopus-like creatures that live in Firestone Lake and Fortress Centrum. They shoot rocks out of their mouth toward Link. Octoroks patrol small areas, but always turn towards Link when he is nearby. They have a rather large defense, so it takes multiple sword slashes to defeat them. A better method is to toss a single Bomb towards the Octorok to defeat it. Octoroks always leave behind a valuable Blue Ruby as their spoil.

Octoroks can be found in only in Tykogi Tower. They look like and act the same as in The Faces of Evil.