From Zelda Dungeon Wiki
(Redirected from Nintendo Gamecube)
Jump to navigation Jump to search
Want an adless experience? Log in or Create an account.
Nintendo GameCube 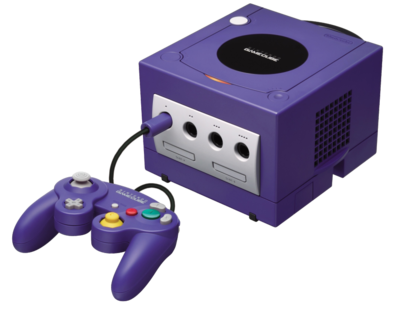 The Nintendo GameCube, commonly referred to as the GameCube or simply GCN, is the fourth home gaming console made by Nintendo to be released internationally. The Nintendo 64 started a revolution of 3D gaming, which the GameCube improved upon with smoother textures and faster frame rates.

There were three new Zelda games released for the GCN; however, there was also a remixed version of Ocarina of Time on a bonus disc, and a limited edition Collector's Edition disc, which featured four Zelda games from prior consoles.

Main article: The Legend of Zelda: The Wind Waker

Available as a pre-order bonus in some territories, and included in the case for The Wind Waker in others, this included two versions of Ocarina of Time running under emulation. One was essentially the Nintendo 64 game, running at 640×480 with some minor changes (the star and crescent Gerudo design, seen in various places - including on the Mirror Shield - was revised to a snakehead design, and button colours were shuffled to match the GCN controller, and some cutscenes were included as pre-rendered video).

The other was the first release of Ocarina of Time Master Quest, a version with remixed dungeons originally planned for the failed 64DD disc drive add-on for the Nintendo 64.

Collector's Edition was a compilation of four games in the Zelda series from before the release of the GameCube, two for the Nintendo Entertainment System and two from the Nintendo 64, all running under emulation.