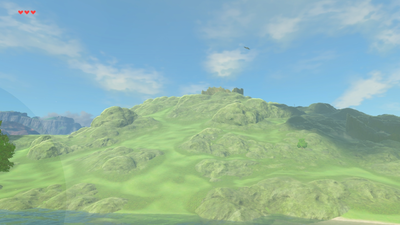 The Crenel Hills are a landmark in the Central Tower region in Breath of the Wild.

The Crenel Hills is a land area east of Hyrule Castle surrounded on three sides by the Hylia River.

A bit further to the northwest, there is a small pond where an Ice Wizzrobe can be found. In the pond, there are a circle of lilies that Link can jump into to get a Korok Seed.

At the far west end of the hills, there is a small camp with some Red Bokoblin, a Blue Bokoblin, and some Keese. Inside the base, there is a wooden treasure chest with a Purple Rupee.

At the far northeast of the hills, across the river there is a dock with a Raft, allowing for quick navigation from the Woodland Stable to the hills. Just south of the raft there is a treasure chest in the water that has a Purple Rupee. A second chest is just west of the dock that has a Soldier's Bow. On the Crenel Hills side of the river, there is a skull base that is partially buried in the water. Link can use a bomb to blowup the entrance and inside, there are a pair of treasure chests which contain a Thunderstorm Rod and five Shock Arrows. Another skull base can be found in the water, east of the hills, with a treasure chest underwater that has a Silver Rupee.

In one of the enclosed circles near the center of the Crenel Hills, Link will find the Namika Ozz Shrine. The shrine is A Modest Test of Strength shrine that has a Guardian Scout III who wields a Guardian Spear+ and an Ancient Battle Axe+. Link can then open the treasure chest to get a Frostspear before then talking with Namika Ozz at the altar to get the Spirit Orb. 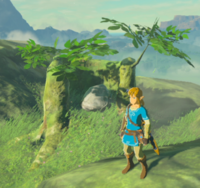 Pick up the rock in the stump.

Lift up the rock to reveal the Korok. 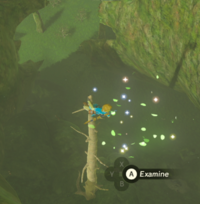 Climb up the dead tree in the hollow stump next to the shrine. Examine the fairy lights at the top.

Climb the dead tree and examine the fairy lights at the top.

Dive into the circle of lilies. Beware of the nearby Ice Wizzrobe 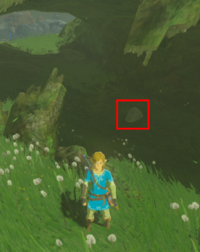 Lift the rock up.

Within the log lift up the rock to reveal the Korok.

Grab the magnetic block from across the river to finish this magnetic puzzle.