From Zelda Dungeon Wiki
Jump to navigation Jump to search
Want an adless experience? Log in or Create an account.
Moon Children 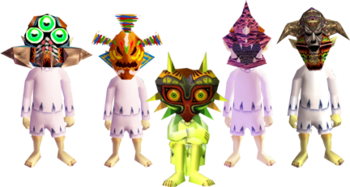 The Moon Children are a group of five children found on the Moon within Majora's Mask. Four of them wear the remains of the bosses as Masks, while the fifth one wears Majora's Mask and sits alone at the base of the tree.

The four who wear the Boss remains can be seen running around in the field and each one of them will say a different thing to Link when he speaks with them, however, a trait they all share is the fact that they will ask Link to play a game of hide and seek with them after he gives them a certain amount of masks. The layout of the chamber Link is brought to for each "game" depends on which child he speaks to, as each chamber is in a way reflective on what area of Termina the child's Mask was originally received in. The young hero can choose to play with them if he has all the Masks collectible in the game, and after this, when he has no masks left, he may approach the child wearing Majora's Mask. This particular Moon Child will say that he had no Masks and gives Link the Fierce Deity's Mask to make things fair. Overall, this is completely optional. If Link wants a real challenge, they can speak to this boy straight from the get go and face Majora without the use of the Fierce Deity's Mask.