From Zelda Dungeon Wiki
Jump to navigation Jump to search
Want an adless experience? Log in or Create an account.
Molblin's Magic Spear 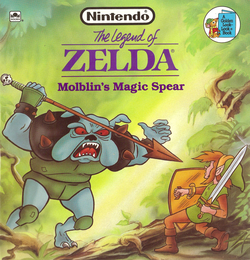 Molblin's Magic Spear is a children's story book based on The Legend of Zelda, that was licensed by Nintendo of America. The book was written by Jack C. Harris, and it has pretty good art that was illustrated by Art and Kim Ellis. It was published by Western Publishing Company, Inc in 1989, and Golden Books on February 1, 1990.[1]

Some copies of the book also came with an audio cassette tape which narrated the story, and it even featured the voice actors from The Legend of Zelda Animated Series who providing voices for the characters.[2]

The story takes place during the events of The Legend of Zelda when Link is on his way to rescue Princess Zelda from Ganon's clutches. In his journey, Link encounters a Moblin that wielding a magical spear. The spear can regenerates more spears to attack Link with, when it is thrown.

TODO: Rewrite and elaborate plot.
Care to do so?

A homebrew NDS port of this book was created by DesertDog of Multiple Option in 2009. As well as the NDS version; multiple-option has also made a video version with narration by Winter11, animation by TheTwinSays, and music taken from Ocarina of Time. This NDS file can be downloaded here.[3]