From Zelda Dungeon Wiki
Jump to navigation Jump to search
Want an adless experience? Log in or Create an account.
Masanao Arimoto 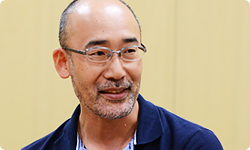 Masanao Arimoto is a game developer who has worked for Nintendo since the late 1980's, first working on the Famicom Disk System title, Yūyūki, before then moving on to games for the Super Nintendo Entertainment System. His first work on the Zelda team came on A Link to the Past, where he worked alongside Tsuyoshi Watanabe as a Background Designer. He would later go on to work as an Character Director for Link's Awakening, a Design Manager for The Wind Waker and Four Swords Adventures. Arimoto would return to work on The Wind Waker HD, working with the Graphic Design team.

When working on The Wind Waker, he worked along his fellow design managers, Satoru Takizawa and Yoshiki Haruhana. It was Arimoto's job to figure out how to create a world that was based on the artwork that was provided to them.[1] He also spent time working on Link's reactions and in particular his eye movement, so that the character would be looking in the direction of interesting objects.[2] Arimoto explains that this is one of the qualities that differentiates the Wind Waker. The anime style that they had used made it so that the oversized heads of the characters or their small legs didn't make the game feel out of place.[3]

In addition to working on several Legend of Zelda titles, Arimoto has worked on several games in the F-Zero, Super Mario, Pokémon, and Super Smash Bros. franchises.