From Zelda Dungeon Wiki
Jump to navigation Jump to search
Want an adless experience? Log in or Create an account.
Lumpy Pumpkin 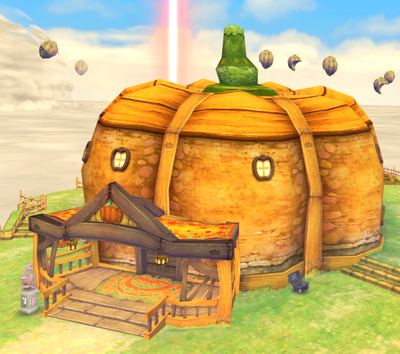 The Lumpy Pumpkin is a pumpkin-shaped building on Pumpkin Landing in Skyward Sword.

The Lumpy Pumpkin is a tavern, known primarily for its Hot Pumpkin Soup, which it sells for 10 rupees a bottle. The owner, Pumm, also makes an annual offering of the soup to the great spirit Levias. Link must bring the huge, pumpkin-shaped basin into the Thunderhead with the help of Scrapper to draw the Bilocyte-infected Levias out.

After all three of these are done Link will be forgiven and rewarded with a Piece of Heart, while a new chandelier will be installed.

Link can then play the Goddess's Harp with Kina at night to gain Rupees.