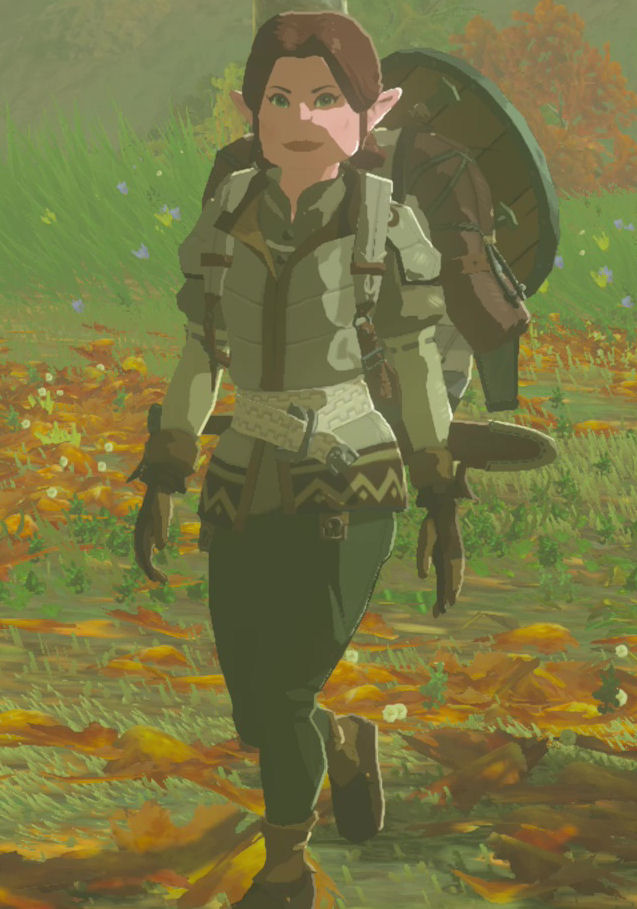 Lonni is a character from Breath of the Wild.

Lonni is a traveler who can be found walking between the South Akkala Stable and a small rest stop, just south of Tarrey Town. She wields a Hunter's Shield and Traveler's Sword to defend herself against any enemies she encounters.

Lonni will talk about the Great Fairy, Mija, who can be found just south of the road from Tarrey Town. She had heard rumors that the Great Fairy has the ability to make clothes luxurious.[4][5] Lonnie also mentions Hyrule Castle, although she is more interested in the monsters that could be at the castle, as oppose to all the treasure.[6]

She will talk about a variety of monsters that she encounters, including a Stalnox, which while they are creepy, she thinks its cool the way that they toss their own bones out at their enemies.[7] While just north of Lake Akkala, Lonni mentions some rumors about a really big monster in the area, but she hasn't seen it herself. She is likely referring to the Stalnox, which is located just to the north in the East Akkala Plains.[8] She references the same monster when she is near the fork in the road, stating the path heading north leads to the East Akkala Stable, where Link will pass right by the Stalnox.[9][10]

Lonnie has some random knowledge about other enemies, such as Octoroks. She mentions that Octoroks can drown, even though they are octopi. Only Water Octoroks can survive in the water.[11]