From Zelda Dungeon Wiki
Jump to navigation Jump to search
Want an adless experience? Log in or Create an account.
Karin 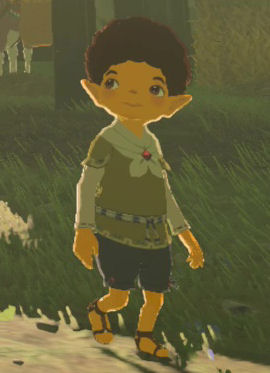 Karin is a character in Breath of the Wild

Karin lives in Hateno Village with her father Reede and her mother Clavia. They live in the large home at the north part of town where there is a Goddess Statue right in front.

Karin has claimed to see Purah, the Sheikah who does research at the Hateno Ancient Tech Lab. Despite being elderly, she has the appearance of a child. When Karin talks to adults about Purah, they don't believe her, as they know that only an older man and older woman work up at the tech lab.[1][2]

Karin has told two of the boys in town, Sefaro and Azu about the girl she saw at the tech lab. Karin has described the girl as being super cute with really big eyes.[3] This has caused the two boys to become spies, constantly looking up towards the tech lab to see if Purah will come out. Since the two boys never actually see Purah, they begin to wonder if Karin was lying to them.[4] Despite being on the lookout, the boys have yet to see Purah.[5]