From Zelda Dungeon Wiki
Jump to navigation Jump to search
Want an adless experience? Log in or Create an account.
Jerrin 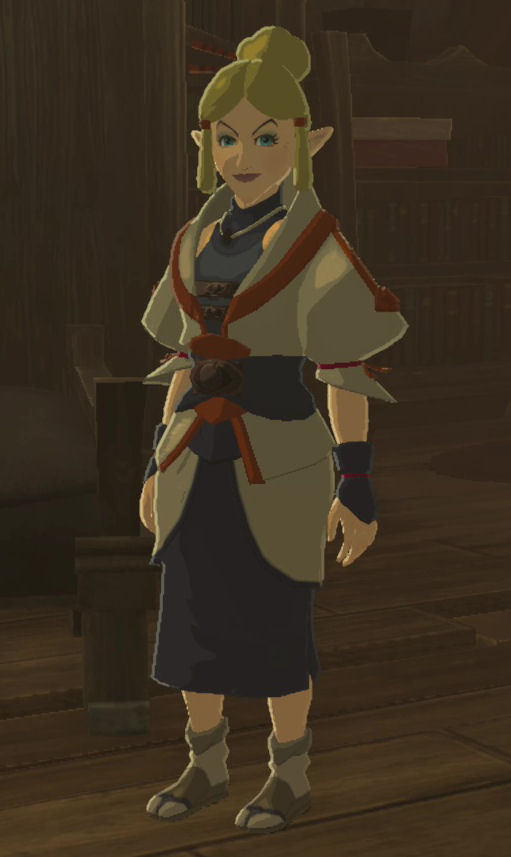 Jerrin is a character from Breath of the Wild.

Jerrin can be found alongside her husband Robbie over at the Akkala Ancient Tech Lab. Despite there being a 50-year age difference between the two, they are in fact married.[1] The two of them run the Akkala Ancient Tech Lab together, where Jerrin focuses her research on Shrines.[2] They also have a son together, Granté, a traveler who is out and about.[3][4] She asks Link that if he does run into his son, to be nice to him.[5] Jerrin is 70 years old, but hides that fact with makeup.

After first reaching the tech lab and continuing the Robbie's Research side quest, Jerrin will be on the first floor of the tech lab, examining some of the books that are on the shelf. When Link first meets Jerrin, she strike a pose that is an impression of Purah, the director at the Hateno Ancient Tech Lab.[6]

Jerrin will wake up each morning at 5am and spend the entire day inside, reading books at the library. At 9pm each evening she will head off to bed.[7] Link can wake her up while she is sleeping, but she will find this to be quite annoying.[8]

After completing the Robbie's Research side quest, Link can speak with Jerrin inside the tech lab. When asking who she is, she will tell Link that she's researching shrines and knows of a shrine to the west at Skull Lake. She mentions that there is a shrine at the top of the left eye, but it is very high up and a challenge to get to. She also mentions the eye on the right side is where Kilton can be found at nighttime.[9] This will begin the shrine quest.