From Zelda Dungeon Wiki
Jump to navigation Jump to search
Want an adless experience? Log in or Create an account.
Great Bay 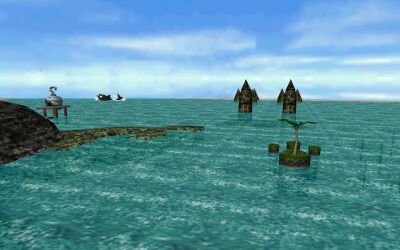 The Great Bay is the third main region that Link must travel to in Majora's Mask, a coastal area in the east of Termina.

To reach Great Bay, Link must have Epona to jump the fences separating it from Termina Field. On Link's first arrival, he finds out that the bay's waters have become murky and too warm, which is causing many problems within the region. After bringing one of the dying Zoras to shore, whose name is Mikau, Link finds out that the Pirates have stolen Lulu's eggs, which Link must retrieve. After Link obtains all seven eggs, he takes them to the Marine Research Lab, where they hatch and teach him the New Wave Bossa Nova. Playing this at Zora Cape restores Lulu's voice and wake the giant turtle, which allows him to reach the Great Bay Temple. After defeating the boss of the Great Bay Temple, the bay's waters return to normal for the rest of the three-day cycle.

This is the main area within Great Bay and it is home to many of the locations that Link first comes upon. The waters along the coast have become murky and unsafe due to evil hidden deep within the temple. This area also leads off to the many other areas of the Great Bay region, such as the Zora Hall and the Pirates' Fortress.

The house is right next to the Fisherman's Hut and can be entered to find all thirty of the Gold Skulltulas for a reward. The rewards differ depending on which day it is. In the N64 version, if Link completes the house on the First Day, he is gifted with a Wallet upgrade; but if completed on the Second Day, he is rewarded with a Purple Rupee while on the Final Day, he is only rewarded with a Red Rupee. In Majora's Mask 3D, he receives a Wallet upgrade regardless of which day it is completed. 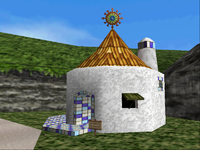 The hut is located right next to the Oceanside Spider House. It is home to the Fisherman who has various fishing equipment, a picture of a Gerudo Pirate, and a Seahorse inside a water tank.

Fisherman's Island is to the west of Great Bay Coast. It is composed of several small islands and platforms and is run by the local Fisherman. However, due to the murky and unsafe safe waters of the bay, the Fisherman's Jumping Game at that moment in time is closed. After completion of the Great Bay Temple and after defeating the Gargantuan Masked Fish: Gyorg, peace restores to the waters of the bay. This now means that the Jumping Game is open for business once again.[1]

The lab can be seen from the shore and is located just off the Great Bay Coast. It is a small house with the Professor inside. There is an Owl Statue located right before the ladder to the entrance. Link must find the seven Zora Eggs within the region, four are located within the Pirates' Fortress while the remaining three are located around the waters of Pinnacle Rock. Link must then return the eggs to the Lab and place them in the fish tank.

This Cove is located to the north of the coast and can only find a huge wall and some Gerudo Pirates here guarding the entrance. In order to enter the Pirates' Fortress, Link must transform into a Zora and swim underneath to find the hidden passage.

The Fortress is heavily guarded by Gerudo Pirates and can be accessed via a secret passage hidden beneath the shore. The first area of the Fortress is mainly water and is watched over by Gerudos in small boats. Within the actual grounds lie many Gerudos who seek to guard the area from intruders. Link must find four Zora Eggs here and then return them to the Marine Research Lab. Link can also obtain the Hookshot here which helps him later on.

This is an area far into the deep waters of the Great Bay. Link must enlist the help of the Seahorse in order to successfully navigate to this location. Here, Link can find three out of the seven Zora Eggs, however, they are guarded within small caverns guarded by the treacherous Deep Pythons.

The Zora Hall is the main area in which the Zora race reside within the land of Termina. Here, Link finds the Zora Shop, where he can purchase useful items and Potions. Within the center of the Hall lies a large music stage where the popular music band, The Indigo-Go's, play.

The cape is a form of bedrock and is the site where Link finds the Owl Statue for the Zora Hall Coast area and also the sire where the Giant Turtle resides. If Link plays the New Wave Bossa Nova, he can awaken the Giant Turtle who can lead Link into the Great Bay Temple.

Once Link has awakened the Turtle, he can the safely travel to the distant temple which has been the cause of the murky and unsafe safe waters of the bay. Within this dungeon, Link pumps and manipulates the water and he must also make use of the Zora Mask to navigate the waters within. Link obtains the Ice Arrows and faces the Gargantuan Masked Fish: Gyorg (Boss). After defeating the boss, the curse on the waters lifts and Link is gifted with a Heart Container as well as Gyorg's Remains.

The rapids are above the waterfall on the south side of the coast and to east of the Zora Hall. Here, Link can find two beavers who let him play a mini-game. If Link is successful two times, he is gifted with a Bottle, however, after two more difficult races with the opposing Beaver, he is rewarded with a Piece of Heart. Link can access the rapids by using the Hookshot to climb up the many ledges leading towards the waterfall. 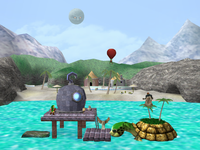 The Great Bay appears as a playable stage in Super Smash Bros. Melee, based around the Marine Research Lab. Tingle is floating above, and players can pop his balloon, causing him to fall. In the background, players can see the Moon descending, and then the Four Giants pushing it back up. The turtle also appears in this stage, but only for a limited time.

The Great Bay stage from Melee is reused in Super Smash Bros. Ultimate with updated visuals.