From Zelda Dungeon Wiki
(Redirected from Gerudo Tribe)
Jump to navigation Jump to search
Want an adless experience? Log in or Create an account.

A Gerudo as seen in Ocarina of Time

"A kid like you may not know this, but the Gerudo race consists only of women. Only one man is born every hundred years..."

The Gerudo is a recurring race in The Legend of Zelda series. The most prominent trait of the Gerudo is the race only consisting of females except one male being born every one hundred years.

In Ocarina of Time, the Gerudo live in the Gerudo Desert, which is located northwest of Hyrule. They are a race of thieves and have a giant fortress called Gerudo's Fortress. They always live together as a pack in big forts and worship the Goddess of the Sand. They have built a huge monument for her as well as a Spirit Temple in the Desert Colossus.

The Gerudo is a dark-toned race consisting of only females with the exception of one male being born every one hundred years. That male according to legend is supposed to be their king. However, Nabooru rebelled against her king in Ocarina of Time, the king being Ganondorf. The Gerudo females are usually dressed in purple attire, have red hair and wield Shamshir-like swords. They seem to not like Hylian culture at all and the relations with Hylian men are purely for survival reasons. The Gerudo seem to think that worshipping the Golden Goddesses and having gender roles is out of the ordinary.

In Majora's Mask, the Gerudo are referred to as "pirates". They have stolen the Zora Eggs that belong to Lulu, the singer of The Indigo-Go's. Their fortress is surrounded by guards that throw Link out if he is caught.

Only in Four Swords Adventures is the entire Gerudo tribe friendly. Their abode is located in the Desert of Doubt. Link's passage through Gerudo Village is initially halted by closed gates. This is due to Ganondorf passing to try to claim the power of the sacred Pyramid for himself in direct violation of the Gerudo law code. 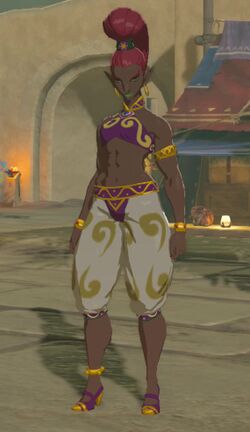 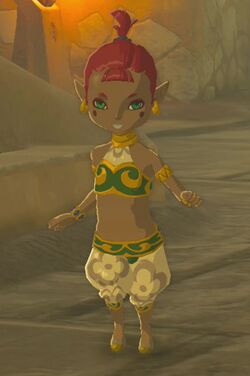 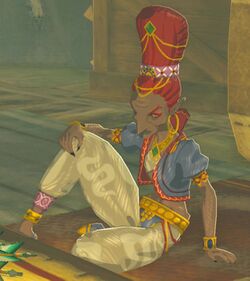 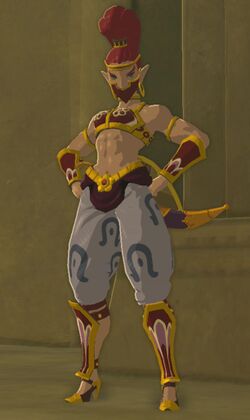 Teake, a Gerudo Captain of Guards

The Gerudo are a mostly female race primarily living in Gerudo Town. When Link first arrives at Gerudo Town, no voe (men) are allowed in to the town, requiring him to return Kara Kara Bazaar in order to buy the Gerudo Clothes so he can pass as a woman and be allowed to enter. No male Gerudo are ever met, but Gerudo voe clothing can be bought from the Gerudo Secret Club indicating that Gerudo men do indeed exist but are rarely born, similar to previous games, where the Gerudo King has been the only male baby born in the century.

The Gerudo are known for being tremendously fit, tall and shapely, exceeding heights of 8 feet as adults, though they tend to become thinner and daintier when they become old. Even Gerudo not involved in combat by trade are fit, and often tower over Hylians in comparison. Adult Gerudo exhibit small torsos, wide hips and long legs, as well as a slight non-pathologic spinal lordosis that gives them a characteristic backwards lean when standing.

Gerudo young children exhibit paradoxical physiology compared to adults, presented by the fact that their torsos are big and their legs are short, which are contrary features to those of adults.

Most, if not all of Gerudo have hair colors which are variations of red; their skin colors range from dark brown (Sumati, Nali, Marta), to olive (Buliara, Isha), to leucistic (Teake, Calyban, Ashai). They also present an innate resistance to the desert heat, as well as a surprising resistance to the volcanic heat of the Eldin Province, albeit expressing discomfort towards it. As there are no Gerudo individuals in Hebra or the Gerudo Highlands, it's assumed that they are not good at tolerating cold, though the presence of the Eighth Heroine statue at the northern part of the Highlands may suggest that this is not always the case.

Their facial features are striking, with protruding noses and stern expressions, and like Hylians, they have elfin-looking ears. Gerudo sport makeup, particularly different-colored lipstick and face painting, which is also used by young girls. It's shown that the more makeup a Gerudo sports, the less striking their features become (like in the case of Urbosa). These facial features become more pronounced the older the Gerudo is.

Though most Gerudo continue to live in Gerudo Town, many leave to travel across Hyrule and are met by Link during their travels. The most frequent reason for Gerudo leaving is to either sell their wares in distant locations or to marry. With no Gerudo voe, Gerudo who wish to marry leave Gerudo Town to travel across Hyrule in hopes of finding a husband, and maintain an eager curiosity towards Voe, domestic life and the concept of marriage as a whole fueled by their isolationist status. Even after marrying, many Gerudo return to Gerudo Town to sell wares they procure during their travels.

The Gerudo are known for their pride and exuberance leading to a somewhat stubborn nature towards other Hyrulean races, albeit they are in more amicable terms with said races, unlike other previous depictions of the race. In terms of romantic prospects, it's shown that Gerudo mainly prefer Hylian partners, and may consider Gorons too removed from their preference to consider marriage or child-bearing. In spite of all this, many Gerudo are shown to be playful and goofy at times, and some are presented as being coy and flirty.

Many Gerudo are trained in combat. They are trained by Teake and Liana in Gerudo Town and guard the city to prevent any voe from entering. Gerudo guardswomen also protect Kara Kara Bazaar from the many monsters in the province. A training compound is located in Gerudo Town where Gerudo warriors train against each other and on dummies made for practice. Gerudo guardswomen greatly admire combat prowess as a trait in their fellow kin, as well as a personal goal.

Gerudo clothing is often brightly patterned and colored. Due to the heat of their home, Gerudo clothing is typically light and minimal in style. Their outfits consist of cross-neck tops with no shoulder covers and midriff baring, knee-high Gerudo Sirwals and high heels, being surprisingly swift sporting said footwear in their desert environment. They also wear jewelry like large earrings and gold arm, wrist and ankle bands. Elders often wear short coats, and soldiers sport mouth-covering masks, vambraces and shin guards.

For entertainment, the Gerudo often watch or participate in Sand-Seal Racing or can be found at the Noble Canteen where the Noble Pursuit is a favorite among the Gerudo. Local spots of interest include the Northern Icehouse, the Kara Kara Bazaar, and the Gerudo Great Skeleton.

The Gerudo Chiefdom follows a matrilineal hereditary succession system with no male influence, and it's not known what status, if any, the Chieftainess' husband holds, though it's assumed to be completely negligible. The status of past Gerudo men is not known either, other than that of Ganondorf.

The Gerudo, unlike in many previous game depictions of the race, are in good economic and social affluence in spite of the presence of the Divine Beast Vah Naboris hindering their free movement in their desert home, having amicable relations with other Hyrulean races, and being in generally good spirits. Also, unlike other depictions in previous games, the Gerudo in Breath of the Wild do not engage in banditry or other illegal activities due to marginalization.

Though the Gerudo speak to visitors in Hylian, they have their own language and often use certain terms when speaking to travelers. They recommend that travelers learn a few words to help with their visit to Gerudo Town:

The Great Fairy Tera, who dwells in the Gerudo Great Skeleton sometimes welcomes Link to her fountain while using these expressions.

In addition to being strong warriors, the Gerudo also make many weapons that are specifically designed to match Gerudo training techniques.

Their weapons and armor include:

Breath of the Wild Trivia