From Zelda Dungeon Wiki
Jump to navigation Jump to search
Want an adless experience? Log in or Create an account.
Gerudo Fortress Trail 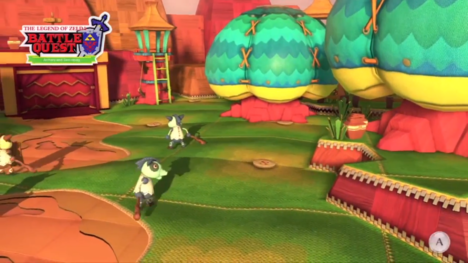 The Gerudo Fortress Trail is the seventh level featured in Battle Quest.

The level begins in an outdoor area that resembles that of The Grasslands. The area is filled with Green Club Moblins, White Shield Moblins, Quick Moblins, and Moblin Archers. Additionally, there are the brand new enemy Stalfos. These bone creatures are very similar to the White Shield Moblins with a few exceptions. They are much more defensive and can quickly move their shield to whichever side the player is aiming. Additionally, the Stalfos has the ability to burrow underground and teleport to a nearby location. They have more health than Moblins, needing quite a few strikes to be defeated. To defeat them, the player must act really quick with his sword strikes. The player can hold his sword on the right, causing the Stalfos to block on the right. The player can quickly move to the left and deliver a sword slash before the Stalfos has a chance to react.

The second area of the level is littered with a bunch of Keese, Tektites, and several more Moblins. Further along, the player will encounter Pot Shield Moblins and Pink Shield Moblins.