From Zelda Dungeon Wiki
Jump to navigation Jump to search
Want an adless experience? Log in or Create an account.
Gaile 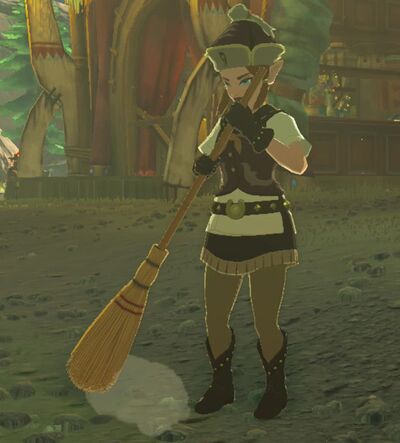 Gaile is a character from Breath of the Wild.

Gaile can be found at the Foothill Stable, where she can be seen sweeping up around the area all day long. At 9pm each evening until 5am the next morning, Gaile will sit down by the Cooking Pot.

She assumes that since Link is stopping by the Foothill Stable, it is likely that he is heading out to Goron City.[1] Based on the clothing that Link is wearing, she will likely tell him that he's not prepared for the climate of Death Mountain.[2] The pathway is filled with steep cliffs and once you get past the second checkpoint, it is so hot that your body could even catch on fire. She will offer to sell Link some Fireproof Elixirs in order to prevent from burning up in the hottest parts of the mountain.[3]

Gaile will sell an elixir for 60 Rupees. However, she also has bulk deals, where she will sell two for 110 rupees, and three for 150 rupees.[4][5] She thinks that if Link purchases three elixirs, he should have no trouble reaching Goron City.[6][7][8]