From Zelda Dungeon Wiki
Jump to navigation Jump to search
Want an adless experience? Log in or Create an account.
Fin 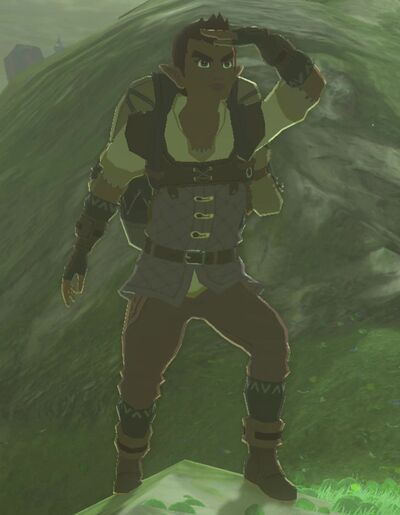 Fin is a character from Breath of the Wild.

Fin is a Hylian who can be found standing near the main path, south of the Trilby Plain. He's one half of The Shield Breakers, where he is partnered with Russ as fans of Shield Surfing. He stands near a campfire, staring up towards a tree in the distance. He's actually staring at his partner, Russ, who is standing right beneath the tree.[1][2] He asks Link if he's going to head up there, and if Link agrees, Link will automatically warp over to where Russ is located.[3]

If Link tells Fin that he doesn't want to head up to Russ to shield surf, Fin will get really upset. Fin gets agitated with Link, asking him what's his deal, and saying that's he's ruining the good vibes that he had. He tells Link to come back after he has chilled out for a bit.[4]