From Zelda Dungeon Wiki
Jump to navigation Jump to search
Want an adless experience? Log in or Create an account.
Dog 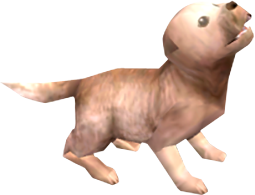 Dogs appear throughout The Legend of Zelda series and are prominent in a number of games.

Some dogs can be found in the streets of Mabe Village. They growl at Link and attack him if he hurts them.[1] If Link sprinkles Magic Powder on one of the dogs, it bursts into flames.

One of the most notable dogs in Majora's Mask is the loose dog is present in front of the Clock Tower. The behavior of the dog changes depending on which form Link takes:

The Doggy Racetrack also exists in Romani Ranch. Many dogs are encased in a fence structure. Link can use the Mask of Truth to hear the dogs' thoughts and determine which will win.

A number of dogs in The Minish Cap actually have names and Link is usually able to fuse Kinstones with them.

There are a few dogs that run around the alleys of Castle Town. One dog lays near Purlo's tent laying down. There is a stick nearby where Link can throw it for the dog to fetch. Link can also speak to these dogs while in wolf form.

In Breath of the Wild, dogs live at Stables. If Link stands next to one, it will start to follow Link. If he attacks it, it will run away and bark at him. If Link feeds one enough, it will lead him to a treasure chest. At the wetland Stable a dog named Satty can be found. This dog acts like normal dogs, but his owner Quince will tell Link about him.