From Zelda Dungeon Wiki
Jump to navigation Jump to search
Want an adless experience? Log in or Create an account.
Death Mountain Climb 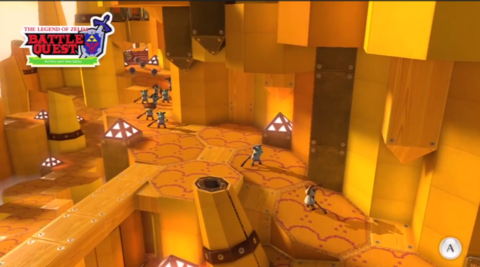 The Death Mountain Climb is the sixth level featured in Battle Quest.

The level takes place in a bright orange area of Death Mountain with the music being a remixed version of the Gerudo Valley theme. The mountain is filled with various types of Moblins including Green Club Moblins and White Shield Moblins. As the level progresses the player will progress over windy bridges where they'll encounter some Tektites and Kargaroks.

There are several new variants of Moblins in this area. There are Bomb Moblins which will roll Bombs towards the player. These bombs are easily avoided by holding out the Shield. These Bomb Moblins, along with the Pot Shield Moblins, have hard pots on top of their heads. These pots make them invulnerable to downward sword slashes. Additionally, the player will encounter new Pink Shield Moblins. These guys are slightly stronger than their White Shield counterparts, needing four slashes to be defeated. Additionally, their reaction time is a bit better as well, in which they'll deliver immediate sword slashes if they block Link's attack.

The second area of the level takes place in a dark cave. There will be more Moblins to fight off, as well as some Keese. These bats will fly down from the ceiling, charging right at the player. They can be blocked with Link's shield or immediately defeated with a well timed sword slash. In the last section of the level, the player will take on some more Moblins, including some Moblin Archers.

The player will take on the dungeon boss in the form of an Armored Big Moblin. This giant creature wields a massive sword and shield and is virtually identical to the standard Big Moblin. The only difference is that it will take more hits to defeat. The player will need to use his shield to block the sword attacks from the Moblin and then counter with attacks of their own while the Moblin is vulnerable. The Moblin will perform a forehand swipe with his sword and will occasionally follow it up with a backhand slash, so the player needs to stay on his toes. After defeating the boss, the player will gain the Triforce.