From Zelda Dungeon Wiki
Jump to navigation Jump to search
Want an adless experience? Log in or Create an account.
Cloud Barrier 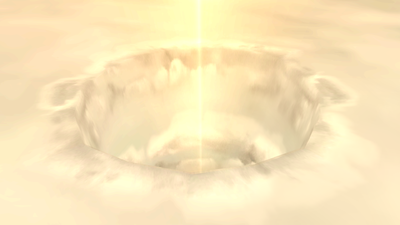 Hole in the Cloud Barrier over Lanayru Province

The Cloud Barrier is a thick shield of clouds erected by Hylia during the Era of the Goddess Hylia, preventing passage between Skyloft and the Surface.[1] Hylia created this barrier after sending Skyloft into the sky in an effort to protect the Hylians and the Triforce from the demons which had overrun the Surface.[2]

At the beginning of Skyward Sword, Ghirahim manages to penetrate the barrier with his magic, summoning a tornado which knocks Zelda off her Loftwing and pulls her down to the Surface. As Link obtains the Emerald, Ruby, and Amber Tablets, he is able to travel freely through portals between Skyloft and Faron Province, Eldin Province, and Lanayru Province, respectively.

After the events of Skyward Sword, the Cloud Barrier dissipates, allowing the Hylians to return to the now safe surface.[citation needed]