From Zelda Dungeon Wiki
Jump to navigation Jump to search
Want an adless experience? Log in or Create an account.
Clean Cut 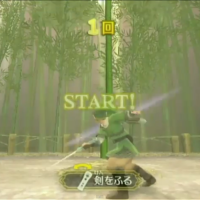 Clean Cut is a mini-game hosted by Peater on Bamboo Island. It's a challenge that requires Link to cut a tall piece of bamboo as many times as he can with his sword. Cutting bamboo becomes easier once Link obtains the Goddess Longsword. A Gossip Stone on Bamboo Island claims that Peater holds the record with 43 slices, although this is doubted by many. If Link is able to slice the bamboo at least 20 times he is rewarded a Monster Horn or Evil Crystal; 28 times, he is rewarded a Blue Bird Feather, a Goddess Plume, or a Golden Skull. It is worth noting that there is no additional reward for surpassing 43 cuts.