From Zelda Dungeon Wiki
Jump to navigation Jump to search
Want an adless experience? Log in or Create an account.
Clavia 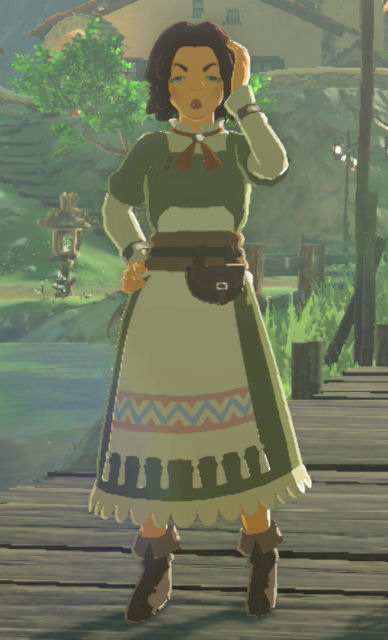 Clavia is a character in Breath of the Wild

Clavia lives in Hateno Village with her husband Reede and her daughter Karin. They live in the large home at the north part of town where there is a Goddess Statue right in front. Clavia will wake up each morning and make her way to dock, just east of the Kochi Dye Shop. If Link speaks to Clavia on her way, she tells him to just follow her for a moment without asking any questions.[1][2]

Clavia will spend the entire day out by the dock, only returning at 9pm when it is time to head to bed. Although she will run back inside if it begins to rain during the daytime.

Secret of the Cedars

Main article: Secret of the Cedars

When Clavia is standing by the dock, Link can speak to her and she'll tell Link a secret.[3] She references the three trees up on the snowy mountain and that when the summit trees become one, Link should turn his back to them and head toward the sea. This is in reference to the three trees making a straight line. She later suggests that Link must head directly east from there, towards the Afromsia Coast. Here there is a trial encased in stone.[4]

The trial encased in stone is reference to a shrine that is hidden behind a bombable wall. Link can blast it open with a bomb to reveal the Tahno O'ah Shrine, completing the Shrine Quest.

Clavia will constantly be asking Link if he found the treasure, joking that she would split the reward with him.[5][6]