From Zelda Dungeon Wiki
Jump to navigation Jump to search
Want an adless experience? Log in or Create an account.
Chris Houlihan's Room 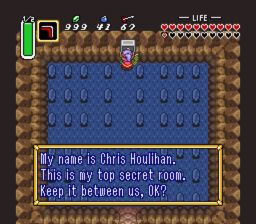 Message from a telepathic tile in Chris Houlihan's Room

Chris Houlihan's Room is a secret location found in A Link to the Past.

Chris Houlihan's Room is a failsafe in the game - it is only accessed when the game cannot load the room associated with a hole Link is falling into because of corrupt location data. The room's layout consists of five groups of nine Blue Rupees (45 in total, worth 225 rupees), a Telepathic Tile, and a water-covered floor.

The room is named so because, in 1990, Nintendo Power magazine had a contest where one had to take a picture of them finding an elusive boss in the game of Final Fantasy and then mail the picture in. Chris Houlihan was the winner of said contest and thus had himself make a cameo appearance in A Link to the Past. It is only named after him in Nintendo of America's SNES English translation of the game and versions which use this.

In the Game Boy Advance port of this game, the corrupt location data bug was patched, and the room can only be accessed through glitching or using cheating devices. The floor is no longer blue except directly under the rupees, and the Telepathic Tile was removed along with any mention of Chris Houlihan's name.

A Link to the Past Locations[edit][hide][show]
Retrieved from "https://www.zeldadungeon.net/wiki/index.php?title=Chris_Houlihan%27s_Room&oldid=299284"
Category: