From Zelda Dungeon Wiki
Jump to navigation Jump to search
Want an adless experience? Log in or Create an account.
Bubinga Forest 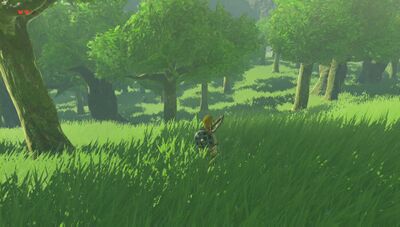 Bubinga Forest is a location found in Breath of the Wild.

Bubinga Forest can be found in the Dueling Peaks Tower region, just east of the Dueling Peaks Stable and south of the Blatchery Plain. The Squabble River birders the forest to the south and east. The forest is littered with a variety of plant life and animal life, where Link can stock up on Hylian Shroom and Ironshrooms. Link can hunt down the various forms of meat here, including Woodland Boar, Mountain Goat, Mountain Doe, as well as a variety of birds.

Enemy Forest Octorok can be a nuisance as they are fairly abundant in this region. Red Bokoblin can also be found and they are occasionally chasing after the Woodland Board that's in the region.

There are some Horses at the west part of the forest, and they are particularly useful as they can used in the Wild Horses side quest that Link gets from Rensa at the Dueling Peaks Stable. In two minutes time, Link will need to speak with Rensa, run over to the Bubinga Forest to catch a horse, tame it, and ride it back to the stable.

Two Koroks can be found in there area, the first is under a rock in the large tree at the west end of the forest. The second is found by the pinwheel on the large rock, right in the center of the forest. Link will need to shoot the balloons with Bow to get the Korok to appear. 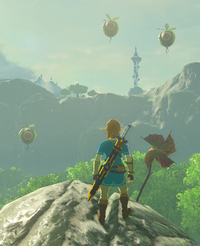 Stand next to the pinwheel and shoot the three balloon targets.

Stand near the pinwheel and shoot the three balloon targets.