From Zelda Dungeon Wiki
Jump to navigation Jump to search
Want an adless experience? Log in or Create an account.
Bongo Bongo 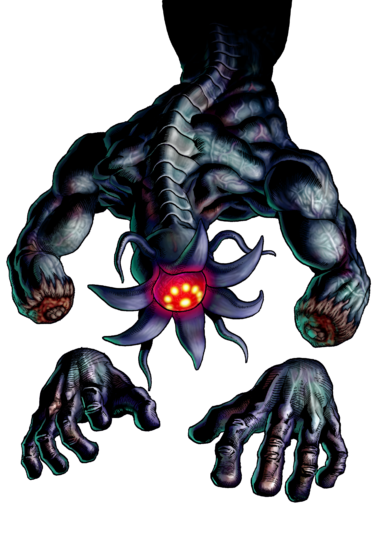 Bongo Bongo is the Boss of the Shadow Temple, the seventh Dungeon in Ocarina of Time. It is a huge spirit that is partly invisible and plays the bongo. Its hands are separated from its body and are the only parts of it that are visible without the aid of the Lens of Truth.

Bongo Bongo was sealed in the Bottom of the Well by Impa, but it breaks the seal and escapes to the Shadow Temple later in the game.

The battle takes place on a very large bongo drum, deep below the Shadow Temple. Bongo Bongo can be one of the hardest bosses in the game as his attacks do quite a lot of damage and are harder to avoid than most other bosses. A couple fairies are recommended for this battle. Despite the dungeon item being the Hover Boots, they are not recommended for this battle. The drum is floating in a sea of poison, so you'll have to jump back on as quick as possible should you be cast off.

This boss attacks by using two hands with generic, predictable punching. His fastest attack is the swiping move, which is hard to avoid sometimes. The best way is to simply hold R to duck, without targeting. The rest of the attacks are generally easily avoided by simply rolling.

The object of the battle is to stun both hands, to make Bongo Bongo vulnerable. The most effective item to use is the Fairy Bow, but Link can also use his Sword, the Longshot, or Megaton Hammer. It's possible to attack the hands while they're in the middle of attacking you, but some attacks are invulnerable, so it's easier to attack the stationary hand. Here's the two best methods I've found to attacking the hands.

Stand far back so you can see both hands. Target and shoot one hand with an arrow. Dodge the other when it attacks, and if it's next to you for a second, such as after slamming the ground, stab it with your sword. Otherwise, target that one, and shoot it when it goes back to its starting position before it attacks again.

Alternatively, wait for one hand to attack. Run straight for the other hand that's not moving and smack it with your sword. Quickly turn and move to where the opposing hand will return to. Smack it as soon as it comes back to its original position.

Once both hands have been stunned, use the Lens of Truth to see Bongo Bongo. He'll now open his eyes and rush towards you, with hands on either sides. Hit his open eye to stun him, with the Fairy Bow once again being the most effective weapon. Repeat this process until Bongo Bongo has been defeated.