From Zelda Dungeon Wiki
Jump to navigation Jump to search
Want an adless experience? Log in or Create an account.
Big Moblin 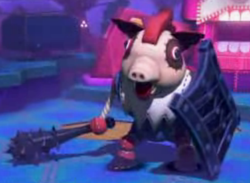 The Big Moblin is an enemy that appears in Battle Quest. They are giant Moblins that use a Shield to guard everything from the neck down. Big Moblins usually appears in groups. Archer players can use the Moblin's open head to their advantage, and shoot there as the Big Moblin slowly walks towards them. Alternatively, players can wait for the Moblin to attempt a strike, at which point it will reveal its entire body, making for a very easy target.

Later on in Battle Quest, there is a different kind of Big Moblin. They have nearly identical features; the only difference being this one wears a helmet on its head, which can withstand the Arrows shot from the Hero's Bow. This forces players to wait until the Big Moblin attempts an attack for them to strike it.