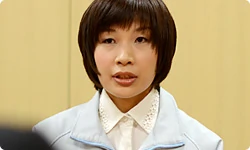 Akiko Hirono is a designer who has worked for Nintendo since the early-2000's. She first worked on titles for the Nintendo 64 and Nintendo GameCube, including Pokemon Stadium 2, Super Mario Sunshine, and Mario Kart: Double Dash!!. While she was given a Special Thanks credit on The Wind Waker, her first major involvement with the series came on Four Swords Adventures, where she is credited with Character Design. She would later work on NPC Design for Spirit Tracks, Skyward Sword, and A Link Between Worlds.

Hirono was a design coordinator for Skyward Sword, where her team helped design characters including Ghirahim and the Mogmas.