From Zelda Dungeon Wiki
Jump to navigation Jump to search
Want an adless experience? Log in or Create an account.
Age of Calamity Expansion Pass 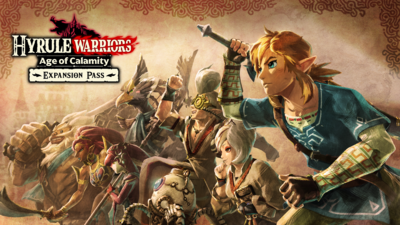 Age of Calamity Expansion Pass is group of paid downloadable content (DLC) for Hyrule Warriors: Age of Calamity. Announced during a Nintendo Direct on February 17th, 2021, it consists of two waves, released on separate dates for a single price of $19.99 USD. Preorders became available on May 28, 2021.

Owing to an eShop error, users in Europe were briefly able to download the purchase bonus and equip them without having purchased the DLC. Nintendo announced that they would be allowed to keep them until the release of Wave 1 of the DLC, but would need to purchase the Expansion Pass to continue using them thereafter[1]

Wave 1 - Pulse of the Ancients

Main article: Pulse of the Ancients

The first part of the Expansion Pass, titled Wave 1 - Pulse of the Ancients, was revealed at E3 2021 on June 15th 2021 and released 3 days later, on June 18th 2021. It includes the Master Cycle Zero for Zelda, the Flail for Link, a new difficulty setting known as Apocalyptic, a new character known as the Battle-Tested Guardian, new enemies such as a Moblin that throws bombs & a Giant Chuchu, and a new location known as the Royal Ancient Tech Lab where players can complete challenges to unlock new weapons and other items.

The second part of the DLC, known as Wave 2 - Guardian of Remembrance was released on 29th October 2021. It added: