Why Link Cannot Draw His Sword From His Back: An Illustrated Guide 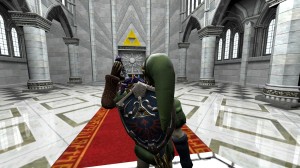 For anyone who has played a 3D Zelda game it is a familiar sight: as you watch Link run around you see his shield on his back, and his sword hilt sticking out on one side. If you have to haul a sword around on long trips it is a good way to carry one, but is it the best way to use it on the battlefield? A number of inventive people have managed to rip the models from various Zelda games and put them into Garry’s Mod, a physics sandbox that runs on Valve’s Source Engine. By messing with the models I have managed to make a demonstration just how difficult drawing a sword from his back would be for Link. Watch my findings after the break!

Starting out with the highest quality model of the bunch: Twilight Princess Link. First, a demonstration of Link’s reach, keeping the limitations of the model in mind. This brings him about as far as displayed in the image. Next, there’s him holding the Master Sword in his hand when he’s at that distance.

But that’s where the problems start. Link simply runs out of arm length to fully draw the Master Sword, and is stuck with the sword still halfways into its scabbard. Even if he were to pull the scabbard down with his other hand while drawing the blade there would be simply too much sword to draw without either overstretching or removing the scabbard from his back and drawing from there.

With a demonstration of just how long the Master Sword is you will see how woefully short Link’s reach comes. A sword of its length simply cannot be drawn from Link’s back unless he suddenly manages to grow his arms quite a bit longer, no matter how hard he tries.

The dimensions for Link in Ocarina of Time were more or less the same for the Master Sword, but it’s the Biggoron sword that makes things go wonky. When equipped the Biggoron Sword is drawn from the back much like the other swords in the game, which gets ridiculous when you realize just how massive the weapon is and that it is impossible for Link to properly draw it from his back.

Young Link has a much easier time with the Kokiri Sword. The sword is easily drawable for the young hero (though the model used is the Majora’s Mask one). It’s with the Gilded Sword where he starts to meet trouble though: when compared to the Biggoron Sword from Ocarina of Time the Gilded Sword is relatively to his length the same size.

The precocious badass we know as Wind Waker Link suffers from the same problems as his non-cell shaded counterpart. While his initial sword is within his reach when not bothered by arbitrary contstraints of his model, the Master Sword is just too large for him to draw from his back, coming short but less so than his Twilight Princess counterpart.

The Goddess Sword from Skyward Sword is, when you look at it, a rather short weapon. While it stretches Link’s abilities to draw, it should be possible for him do draw it. It’s once again the Master Sword that defeats the hero, though this time he is able to at least reach the crossguard as the blade reaches its scabbard. While it would be theoretically possible to pull it out from there, spin the blade around and reach for its hilt doing so is difficult and prone to error when in battle, so this is not a very good idea to do as a standard move.

Of course, it can be argued that it’s just a game and it’s a style choice to have Link be able to draw from his back rather than the more sensible place: the same hip as his sword arm. While the convension of carrying the sword on the opposing hip seems to be more common, this came into swing when sword were a fashion item instead of a battlefield weapon. Instead you’d be wanting to draw from the same hip as your sword arm to either not risk getting tangled up with your shield arm and if you’re on horseback to not accidentally cut your reins or harm your mount’s neck. But if we were to stick to such logic all us people who write articles on The Legend of Zelda where we overanalyse every little detail of the series would be out of a job/hobby.

The interesting thing is that these conventions are all from the 3D games. In the 2D ones Link either carries his sword in his hand (smart, given how frequent and quickly evil can beset him), or he conjures it out of thin air whenever it strikes and have it vanish when he’s done with his swing like in the older games. Where he leaves his sword in those games is unknown, perhaps somewhere in the vast extradimensional space that is called Link’s inventory?

But what do you think about these findings? Are things fine as they are, or should Link carry his sword somewhere else on his body? Or is there another solution to this, like a different weapon? Please share your thoughts in the comments below!

Sources
Garry’s Mod, the program used to make these screenshots in. For sale on the Steam store.
Ocarina of Time 3D Map, the map used in Garry’s Mod to make these screenshots.
Note: Requires the free but sizable Team Fortress 2 to be installed to properly render the skybox.
More Zelda Maps can be found here. Many require Team Fortress 2 as well.
The Zelda Pack, with all the models used for this article.
Easy Bodygroup Tool is required to alter certain models such as the scabbard and shield on Twilight Princess Link’s and Skyward Sword Link’s backs, and Wind Waker Link’s facial expressions.